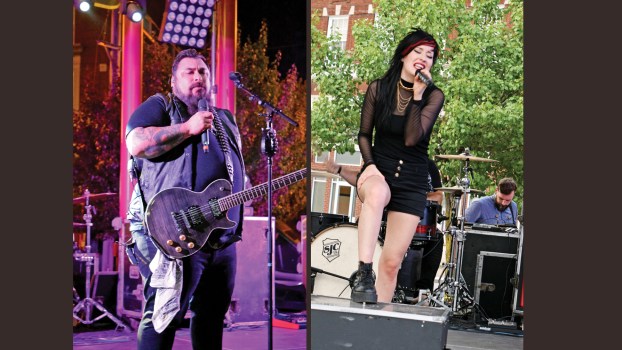 A new entertainment production company hosted its first event at the Ironton Farmers market on Wednesday and organizers say their aim is to bring a variety of acts to downtown.

A Back to School Bash took place featuring Christian-themed hard rock acts, who were playing together as part of the Summer Rock Fest Tour.

Organizers Cody Chaffin and Josh Wheeler said they launched Iron Town Entertainment, hoping to give teens and young adult something to do downtown.

“We’re hoping to create a positive atmosphere for kids,” Chaffin said. “Our main goal is how to get entertainment downtown in a different way.”

“We want to create something where people can turn to,” Chaffin said. “And let them know there are people who they can turn to if they need help.”

The artists performing at Wednesday’s event spoke often of how their faith had impacted them.

Zahna, also known as Suzy Martinez, was born in Mexico, then lived in Ohio before moving to Texas.

She told the audience that one of her songs was written when she was going through a hard stretch in her life and offered her music to lift the crowd through darker times.

Rojas attempted suicide in the 1990s, following issues with cocaine. On his way to hospital in an ambulance, he became a Christian.

In 1996, he formed the band at Christ for the Nations Institute in Dallas, Texas and has been recording and touring ever since, sharing his faith.

Wheeler said he and Chaffin hope to continue their efforts and bring a series of events to downtown, at locations like the Ro-Na Theater and the Farmers Market. He said they are looking at a variety of genres, including country and hip-hop, and also have some stand-up comedians in mind.

He said future events will be announced on the Iron Town Entertainment Facebook page.

Chaffin thanked the city for working with them on the event, as well as his sponsors, which included the Blue Bridge Café, Fit Faith and the Party Place. He said he also received support from county auditor candidate Jason Tolliver, attorney Mark McCown and commissioners Freddie Hayes Jr. and DeAnna Holliday.

Harvest for the Hungry’s second annual dinner and silent auction will be on Saturday, Aug. 18. The event, benefitting the... read more