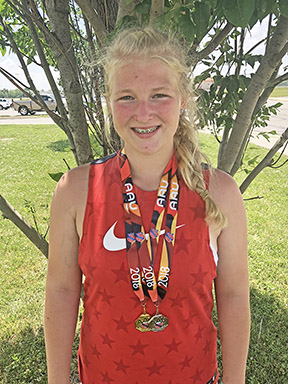 DES MOINES, IA — There were more than 14,000 fans and athletes watching at the AAU National Track & Field meet on July 31 at Drake Stadium, but it was a much smaller group that focused their eyes on Emma Hall.
Despite being the smallest of the competitors in the shot put and discus events, many NCAA Division I coaches in attendance only had eyes for Hall.
Hall used a skillful throwing technique taught to her by John Maynard who happens to be the principal at the Ironton Elementary School.
Standing among the throwing giants, Hall’s technique helped her against the taller and stronger competitors as she registered throws that left her ranked No. 13 in the discus and No. 15 in the shot put in the country for her age group.
“It was a little intimidating because most of those girls were really gigantic,” said Hall. “I feel really proud of myself. I think all of my work paid off.”
She actually had a distance in the discus that would have meant a medal, but she foot-fouled and the throw was not allowed.
Hall’s best shot put throw at the meet was 35-feet, 4.75-inches and the discus 90-feet, 7-inches. The discus throw when she fouled was estimated at more than 100 feet,
“The college coaches asked many questions about her knowledge or the hammer (throw),” said Maynard.
“Due to her compact nature and superior ability to learn technique, they see a bright future in that event. She has the potential to be a three- and possible four-event thrower in college. Emma has a gun for an arm as noted by her years of playing softball.”
Hall may add throwing the javelin to her list of goals next year. This will compound her chances to compete at the next level.
“Unlike other sports, track is simple. Emma realizes that she has to hit the marks. Hit the distances they want and you are recruited,” said Maynard. “In the meantime, they are simply watching her progression with eager hopes as she achieves her goals.”
Hall said that throwing in a stadium of more than 14,000 people was a great learning experience, too.
“I was a little nervous. I was happy to be there. I was excited,” said Hall. “I think it’s going to help me a little bit with stage fright and calming my nerves. If I can continue to do it, it’ll help me a lot with crowds.”
Hall will now put her throwing shoes away for now and head for the weight room. She plans to begin training in hopes of competing in the 20-pound weight throw on the Ohio State indoor circuit.
However, she isn’t starting her training just yet.
“I don’t have anything set up at the moment. Right now, I’m trying to get settled into high school,” said Hall who just turned 14 in July.
The weight throw is the indoor version of the hammer.
“I think I’m going to try the hammer throw. (Maynard) said he was going to teach me. He was going to see if I can throw a javelin,” said Hall.
Maynard says Hall has a great deal of potential.
“We have high hopes for this young prodigy. However, even Emma will tell you potential does not matter without hard work,” said Maynard.
Hall won at a district meet in Charleston, W.Va., on her final throw, then won the shot put and was second in the discus in the regional meet at Grove City to punch her ticket to the national finals.
Hall threw 101-feet, 8-inches in the discus at Charleston but her 32-feet, 8-inch heave won the shot put.
In the regional meet with temperatures climbing into the 90s and causing competitors to wilt, Hall threw the shot put 34-feet, 11 and one-half inches to win the event by one-half inch.