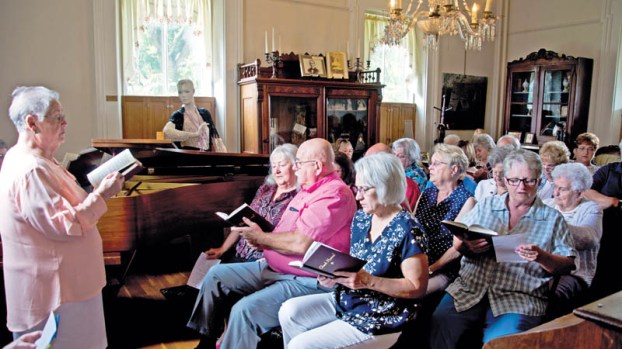 The Lawrence County Museum hosted its annual sing-along on Sunday. The event was conducted by and served as a tribute to Betty Walters, choir director Resurrection Hope Methodist Church.

Heavenly sounds could be heard on the street, coming from the Lawrence County Museum on Sunday.

The annual sing-along took place at the museum, filling two rooms with participants.

Kay Rader, a trustee for the museum, said this is the fourth time the museum has hosted the event.

Songs for this year’s sing-along had a religious theme, including “I’ll Fly Away” and Hank Williams’ “I Saw the Light.”

Sunday’s sing-along was conducted by Betty Walters, the choir director of Resurrection Hope Methodist Church. She was accompanied on piano by Marlene Ferguson.

Rader said the event was a tribute to Walters’ career in music. A cake and refreshments were served afterward.

Rader said the museum has several events planned for the fall, including the annual historic walk at Woodland Cemetery, which will take place on Sept. 30, followed by the museum’s 30th anniversary bean dinner, scheduled for October.

Wheeling into the Paramount