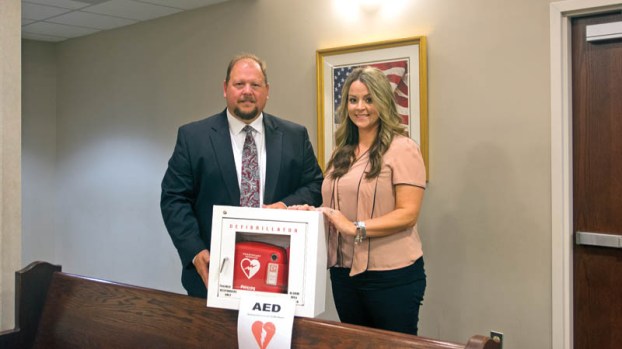 Ironton Police detective captain and president of Fraternal Order of Police Lodge Local #75 Joe Ross stands with Charli Hatfield Stevens and an automated external defibrillator at the Ironton City Center on Thursday. Stevens was concerned that the local youth sports leagues don’t have the AEDs on hand in case of an athlete or spectator has cardiac arrest and started a campain to buy four AEDs for the leagues in Ironton. The FOP donated $725 to cover the cost of one AED.

Machines will help in case of cardiac arrest

On Aug. 27, Charli Hatfield Stevens of Ironton saw a national news report of a boy dieing of sudden cardiac arrest while playing soccer.

She read that if there had been an automated external defibrillator, or AED, there, someone could have used the machine to restart the boy’s heart. The machines are designed specifically for use by people who may not have a medical background or CPR training. But there wasn’t one available at the field.

“The next day, I took my son to soccer practice and asked where the AED machine was,” she said. “They said they didn’t have one. That none of the rec leagues have traveling one, that they didn’t have one at any of the facilities or locations for the Ironton Soccer League, the Ironton Little League, or the both Ironton JFL teams.”

Stevens found that to be unsettling. She did some research and found out that, on average, a student athlete dies every three days from sudden cardiac arrest.

So, rather than just be concerned and fret, she decided to go on Facebook and send out letters to 25 area businesses and organizations to see if she could raise enough money to purchase four of the machines, one for each of the sports leagues in Ironton.

One of those letters ended up on the desk of Ironton Police detective Capt. Joe Ross on Wednesday. He happens to be the president of the Fraternal Order of Police Lodge Local #75.

He felt it was a good cause.

“We take stuff like this seriously. We know there are a lot of kids who are in recreational leagues,” he said, adding it isn’t just for the kids on the field. “There a lot of people who come to watch that might have a cardiac situation.”

So, he talked to the members of the lodge about making a small donation and a lot of the officers have kids who play sports and there was concern that, nationally, a lot of kids die of sudden cardiac arrest while playing or practicing in hot weather. And many of the officers had been in situations where an AED could have saved a life, if it had been available.

“So we felt that this was something we wanted to do,” Ross said. But rather than just make a donation towards buying an AED, the FOP members decided to just go ahead and pay for one AED machine. “We told Charli, that this isn’t something you want, this is a necessity. To me, that is what that money should be used for, a necessity for our community, since we are serving and protecting the public.”

Stevens said that in just nine days, she has managed to secure a partial grant that reduced the price of HeartSine Samaritan PAD 305P AED with a carry case and wall bracket by $325, making the cost of a machine $725.

Stevens has gathered enough to get three of the four AEDs. Beside the donation from the FOP, retired Ironton veteran Jack Leonard also paid for one. There has been $1,500 raised on Facebook so far.

“I’m not surprised by the outpouring of support but I am overwhelmed,” Stevens said. “I think it says a lot about the community.”

Stevens said that the AED machines have a full eight-year warranty, but can last longer.

She added that after the season is over, the machines could be stored either in someone’s home or at the field’s storage shed.

“It really just depends what the head of the league or board wants to do,” she said. “Just as long as they are available for practices and games.”

Since the campaign has been successful, Stevens said she would like to get more AEDs for every league in Lawrence County.

“I’d like to have them for Coal Grove, Fairland, Chesapeake, everywhere in the county,” she said. “It doesn’t have to be just Ironton.”

“I agree with her,” Ross said. “I believe it can snowball and get an AED at every sporting event. That would be the best.