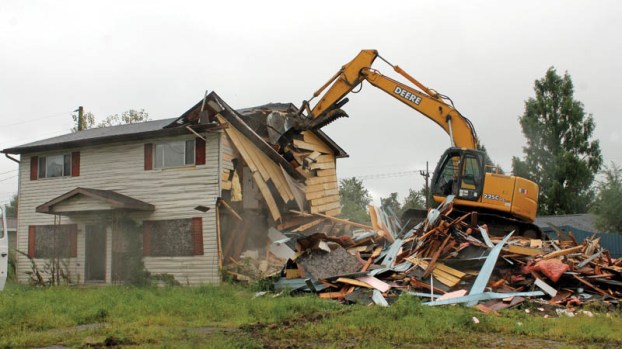 Representatives from the Lawrence County land bank, demolition crews, South Point Mayor Jeff Gaskin and neighbors gathered at the site of the Otter Property apartment complex Monday morning for its demolition. The project marked the 117th, 118th and 119th demolitions of the land bank.

SOUTH POINT — The eyesore that was the Otter Property apartment complex in South Point is no more, as the Lawrence County land bank and crews were at the site Monday morning for demolition.

“This project was tied up in bankruptcy for the longest time,” Stephen Burcham, head of the Lawrence County land bank, said. “We were able to work with the Village of South Point, who was able to get it out of bankruptcy after the bank signed off on the transfer.”

South Point Mayor Jeff Gaskin said the village has been working with Virginia-based attorneys, banks and bankruptcy court for more than a year trying to gain the property for the land bank, due to the owners of the property being from Virginia.

“This is a day that a lot of people have been looking forward to in South Point for a long time,” Gaskin said. “I would even say that some neighbors are excited about it.”

Burcham said that typically, the land bank has a $25,000 limit per structure, but it was able to get that increased to $75,000 for this property due to there being three separate units.

The total bid for the demolition, which included the asbestos removal, was $56,150, and was awarded to Webb Excavating.

The three structures marked demolition numbers 117, 118 and 119 for the land bank, which began more than a year ago. The land bank is currently allocated for demolitions of 173 properties.

During the demolition, Gaskin had a tent set up for neighbors to enjoy watching the structures come down, along with donuts and coffee. He also said that later in the day, Snak Shak was going to be providing hot dogs for lunch at the site.

EMS report given at commission