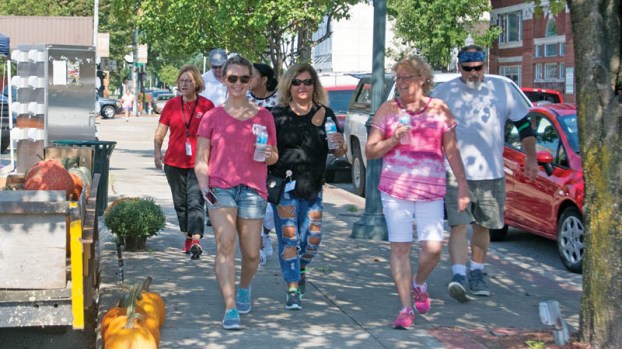 A group of walkers return from a one-mile walk around downtown Ironton as part of Steady U’s “10 Million Steps to Prevent Falls” event on Friday. The goal of the event was to raise awareness about preventing falls among senior citizens.

The goal is to have Ohioans take 10 million steps to raise awareness about the dangers of falls among senior citizens.

In his opening remarks, Ohio Department of Aging Deputy Director of Outreach Division John Ratliff said that one in three Ohioans, aged 60 and older, will have a fall during the year.

“It is the leading cause of injury-related ER visits, hospitalizations and even death among older adults,” he said. “It is a very serious issue.”

He said that is why it is important to do fun things like the 10 Million Steps event.

The event included a number of vendors that might be of interest to older Americans, as well as fresh fruit, granola bars and peanuts to snack on. The Ironton High School Varsity Singers also performed for an hour in the hot September weather.

Teams of walkers came to make a one-mile trek from Market Square to South Fifth Street to the area around the courthouse and then back to the square. There were also teams of Lawrence County students walking at their schools to add to the state’s goal of 10 million steps.

“Ironton was one of the first places to really get the concept of 10 Million Steps when it started in 2015,” Ratliff said. “We wanted the community to rally around it, to build around it and not just do the walk, but bring in community partners and businesses. Because it is all about the community coming together to protect and empower our elders.”

He said that since it’s inception, Lawrence County and especially Ironton, has been a leader in numbers of steps taken.

“It has grown and we are thrilled that it is still going on,” he said.

This year, Community Home Health Care helped organize and put on the event.

Tara Boggs, one of the co-owners of Community Home Health Care, said although she didn’t have a total number for the number of people who showed up at the event, she was pleased by the attendance.

“And not only here, we have kids at the schools walking,” she said. “I got pictures of the kindergartners at Sugar Creek Academy walking, it was so cute.”

Becky Young, one of the co-owners of Community Home Health Care, said they were happy to see so many seniors attending.

“We are hoping with the pamphlets they picked up here, it will help them to know things to do and things not to do,” she said. “We want them all to be safe.”

Becky Wiseman was selling breads, jams and produce at the Ironton Farmers Market and came over for a bit.

“I wanted to support the 10 Million Steps,” she said. “I like walking and a mile is pretty easy to do. Last year, I walked two miles, but this year I only did one mile because it’s just too hot.”

While she was there she got her glucose, cholesterol and blood pressure checked.

“It’s been a year, so I thought I should have it done,” she said.

The Lawrence County 10 Million Steps to Prevent Falls event was one of 43 held throughout the state on Friday.

Hazardous waste to be collected this weekend