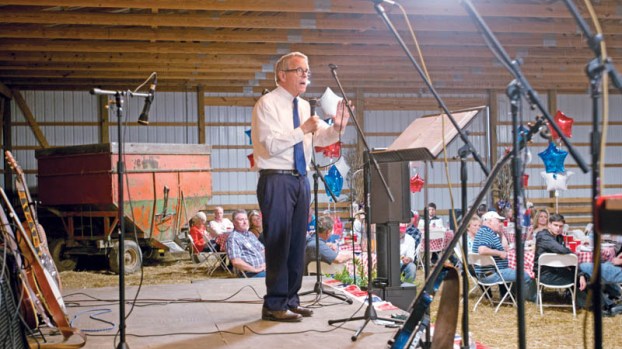 Ohio Attorney General and candidate for governor Mike DeWine talks to Lawrence Countians who gathered at a Lawrence County farm on Saturday. They had made stops in Jackson for the Apple Festival and in Huntington at a TV station before coming to South Point.

Republican candidate for Ohio governor, Attorney General Mike DeWine and his running mate, Secretary of State Jon Husted made a stop in Lawrence County on Saturday.

They were the guests of honor at an ox roast at the farm of Dr. Mike Dyer, a veterinarian and owner of the Proctorville Animal Clinic.

DeWine was first elected to an Ohio office in 1976 as the Greene County prosecutor. He served for four years before being elected to the Ohio Senate in 1980. In 1982, he was elected to the U.S. House of Representatives and served there until 1991, when he became the Ohio lieutenant governor under Gov. George Voinovich until 1994. In 1995, he was the U.S. senator until 2007.

In 2011, he became Ohio’s attorney general, defeating incumbent Richard Cordray, who is the Democratic candidate for Ohio governor.

It was a long day of visits in southern Ohio with a stop at the Apple Festival in Jackson and a quick trip to Huntington to talk with a television station before arriving at Dyer’s farm.

DeWine said his message for the county’s residents is that they aren’t being ignored.

“I know where Lawrence County is, I’ve been here many times and you are going to have a friend in Columbus as the governor of the State of Ohio,” he said.

He said there are several issues that face the county, including employment opportunities and drugs.

DeWine said his job focus will be through JobsOhio.

“We need to focus on rural counties as well as urban areas,” he said. “I think education is important as well. The challenge we face in Ohio is a skills gap, we need to get people up to the skills they need so they can get the jobs they need. The career centers are very important, we are going to put a lot of emphasis on that.”

DeWine said he is strongly against Issue 1, a constitutional amendment on the fall ballot that would lessen the penalties for drug-related charges in a number of ways and make possessing, obtaining or using controlled substances like heroin, methamphetamine, fentanyl, cocaine or LSD into as a misdemeanor crime, instead of a felony.

He said Cordray has embraced Issue 1 and that is a defining aspect of the campaign.

“Issue 1 would be a disaster, it would make Ohio a magnet for drug dealers because they could operate in Ohio with impunity,” DeWine said. For an example, he said if someone had 19.9 grams of fentanyl, it would be enough to kill 10,000 people and under Issue 1, possession of that amount of the drug would be misdemeanor and no jail time. “That makes no sense.”

He said that would undermine the state’s drug courts, which are doing great work.

“They are taking people with a small amount of drugs and basically using tough love to get them into treatment,” DeWine said. “But if this issue passes, those drug courts won’t work anymore because there is nothing over their heads to make them go into a program. Drug courts have saved a lot of people.”

Husted is also no stranger to Lawrence County since this was his fourth visit this year.

He said Lawrence County does a lot of things right, from an economic development standpoint.

Husted began his career working for then Montgomery County Commissioner Don Lucas and as the vice-president of business and economic development at the Dayton-Area Chamber of Commerce until 2001, when he became the Ohio House of Representative for the 41st district.

No charges will be filed in the case of a dead infant found inside of an Ironton residence in April... read more