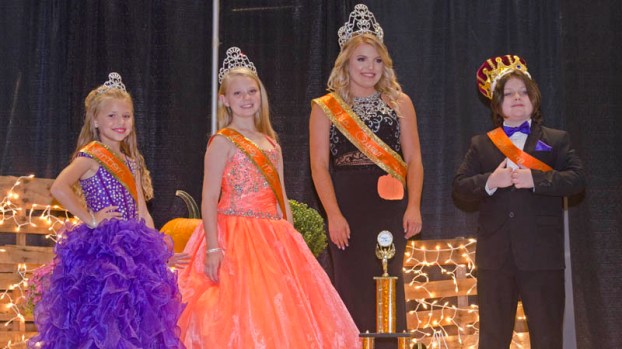 Glamour came to the Ro-Na Theater in Ironton on Saturday, as Ironton aLive hosted the first ever Miss Ironton Area Pageant.

The event took place in two segments, with the afternoon pageant awarding crowns for toddlers to age 15, while the night pageant crowned the queen from the 16-21 age group.

Shoupe, 17, is the daughter of Jennifer and David Shoupe and is a senior at Greenup High School, where she is active in theater, yearbook, plays soccer and tennis and is a member of Future Business Leaders of America and the Ro Kappa history honor society. She said, after graduation, she hopes to go into the real estate business.

As the queen, she will take part in various regional events, such as the Ironton-Lawrence County Memorial Day Parade, the Heritage Festival and the upcoming Wizardfest, set for Nov. 10-11.

She had previously taken part in one other pageant, Miss Greenup County, but Saturday was her first win.

“It feels very good,” she said of getting the crown. “I think it really helps to boost my confidence.”

Her thoughts were echoed by a few of the parents at the event, who said they were proud of their children for entering and taking part in the pageant.

A larger crowd gathered in the theater for the afternoon pageant, which had nine categories, for boys and girls, based on ages.

The top age bracket was won by Maya Mullins, 13, of Ironton Middle School, who was crowned Junior Miss Ironton Area.

She said she found out about the pageant from a friend’s mother and was surprised by her win.

“It feels great,” she said, wearing a blue gown and holding several trophies she received in her category.

In addition to overall winners, awards were given for Most Photogenic, Prettiest Smile, Best Attire and other honors.

Between the contests, there was a musical performance from Madeline Smith, of Russell, whose vocal talents have become known from several Paramount Players performances. She recently starred as Wednesday in the summer’s production “The Addams Family.”

It was a busy week for Sparks, 10, who performed in “Madagascar Jr.” at the Paramount last week.

“It’s amazing,” he said of getting the title, adding that it was his first try at such an event.

Also from Kentucky was Lexi Grace Adams, 8, of Russell, who was crowned Little Miss Ironton Area.

“It feel really wonderful,” she said, wearing a ruffled purple gown. She said it was third entry into a pageant and she hopes to continue.

“And she tumbles,” he mother said. “So she keeps busy.”

Winning the age bracket above her was Karleyann Stephens, 12, of New Boston, who said she was in her second year of competing.

Her peach-colored dress, which she said she got from The Ritz dress shop in Portsmouth, drew many compliments.

“It feels really good,” she said of her win.

Sparks, Stephens and Adams all returned for the night pageant, helping to hand out trophies and gift bags to the entrants.

That event was emceed by Audrey Davis, of PNC Bank and featured a casual and formal wear segment, followed by interviews.

The pageant, coordinated by Deanna Patrick and Cheryl Cleary, was open to entrants from Lawrence and Scioto counties in Ohio, Boyd and Greenup counties in Kentucky and Cabell County in West Virginia.

Organizers hope Saturday’s inaugural pageant will start a tradition and are hoping to host more pageants each fall.