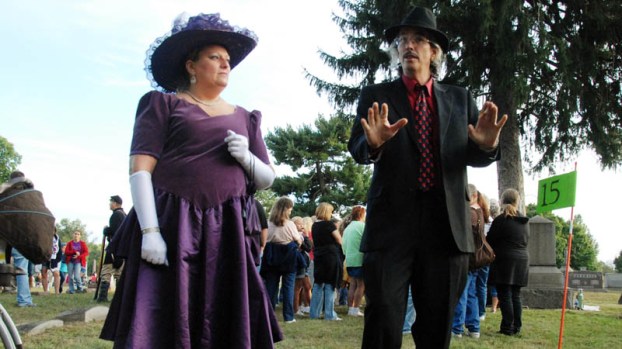 Ann Boggess, left, portrays Clara Campbell, the daughter of John and Elizabeth Campbell and Victor Bradshaw, right, portrays James Arbuckle during the 2010 historical cemetery walk put on by the Lawrence County Museum and Historical Society. The walk will be this Saturday, starting at 5 p.m. and running until dark.

For nearly the 20th year, the Lawrence County Museum and Historical Society will put on its annual historical cemetery walk at Woodland Cemetery in Ironton on Saturday.

The event brings Ironton and Lawrence County history to life with numerous volunteers portraying some of the most prominent figures in local history.

“A lot of people who don’t know about the event hear ‘ghost walk,’ which is what it’s referred to as a lot, and think it’s a scary kind of thing,” Debbie Rogers, vice president of the historical society and organizer of the event, said. “But it’s not. It’s strictly historical.”

Some volunteers who will be a part of the walk this year include Kay Rader, of the historical society, portraying famous ironmaster Nannie Kelley Wright, Joe Unger portraying a World War I soldier, Chris Saunders portraying James Ditcher, who helped enslaved African-Americans escape to freedom through the Underground Railroad, and numerous others.

Yvonne DeKay’s School of Dance will also be a part of the event, portraying Russian ballerina Antoinette Sherpetoska Peters. Some other historical figures that will be portrayed include Charles and Harriet Kingsbury, Hiram and Sarah Campbell, Fredrick and Nancy Norton, Henry and Mary Campbell Neal, Samuel and Mary Dempey and many more.

Rogers said the tour is not guided, and guests can walk around to the different historical figures on their own. There will be around 30 volunteers portraying parts at the walk.

Rogers added that she also wanted to thank the Woodland Cemetery Board for cooperating with the historical society and allowing the event to occur at the cemetery each year.

Bringing the Farm to You set for Oct. 20 at fairgrounds ROME TOWNSHIP — An event scheduled for the Lawrence... read more