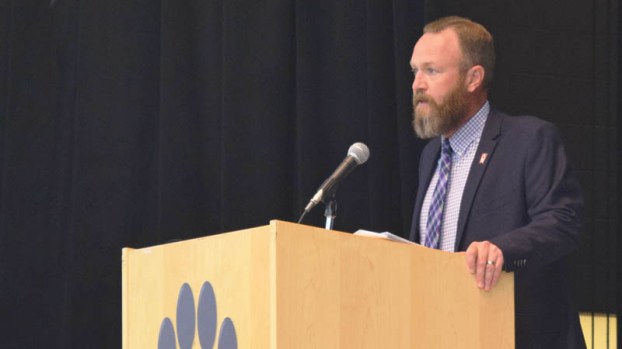 Amendment would reduce penalties for crimes of obtaining, possessing and using illegal drugs

BURLINGTON — Lawrence County Common Pleas Judge Andy Ballard is urging voters to reject a ballot measure that would amend the state’s constitution regarding the issue of illegal drugs.

Issue 1, which will appear on the fall general election ballot, would reduce penalties for crimes of obtaining, possessing and using illegal drugs.

Ballard, who has gained a reputation as a leader on the addiction epidemic and established the county’s certified drug court, told voters at the recent Meet the Candidates forum in Burlington that the amendment would be “terrible for the state of Ohio” and would “make our communities less safe,” if approved.

Ballard voiced concerns on what the amendment would mean for possession of multiple grams of fentanyl, which has been a contributing factor in many overdose deaths in the region.

According to the U.S. Drug Enforcement Administration, two milligrams can be fatal to the average person.

Ballard said that the penalty for 19 grams of fentanyl, enough to kill 10,000 people, would be classified as a misdemeanor under Issue 1.

Ballard took issue with what he described as out-of-state efforts to push Issue 1, and said the campaign was being funded by Facebook founder Mark Zuckerberg and others.

An advocacy group tied to Zuckerberg and his wife has contributed $1 million to get Issue 1 passed in the fall.

He said, rather than approve the measure, efforts should be made on innovative sentencing.

Ballard pointed out that someone who comes through his court and goes to treatment can eventually have a conviction dismissed from their record, something he said Issue 1 would not do.

The judge said while there are some ideas in the amendment that could be workable, the proper way to change drug policy is through the legislative process, rather than an across-the-board amendment.

“We need to send a message to outside interests that we can’t be bought,” Ballard said. “I’m asking you to trust me on this. This amendment is bad.”

Ballard, a Democrat, echoed similar concerns that were made by leaders in Lawrence County’s Republican Party.

At the opening of the party’s headquarters last month, County Prosecutor Brigham Anderson and Sheriff Jeff Lawless spoke out against Issue 1, leading to the party’s executive committee to pass a resolution that night opposing it.

They described the measure as a “nightmare for law enforcement” and noted that police groups across the state oppose it.

If you’ve ever wanted to learn more about UFOs, Ironton native and Community Engagement Coordinator with the Mutual UFO Network... read more