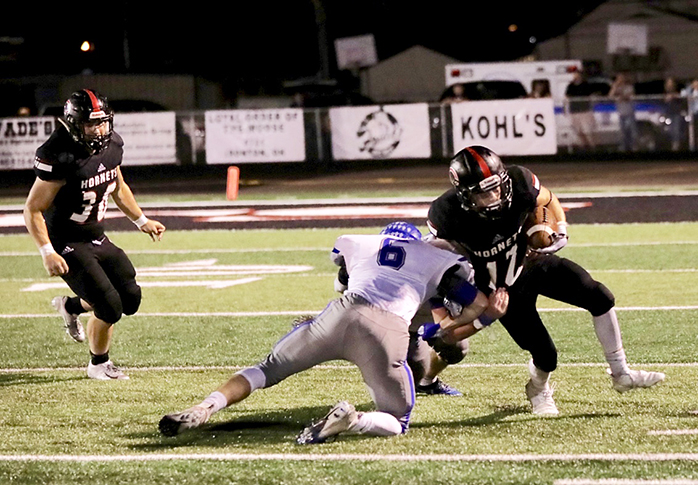 And the stretch run begins.
It’s crunch time for the Ironton Fighting Tigers and Coal Grove Hornets as they seek the Ohio Valley Conference title as well as a playoff berth.
Ironton is tied with Gallipolis for first place at 4-0. The Fighting Tigers need a win when they host Coal Grove on Friday in order to keep pace with the Blue Devils. The two teams were favorites to win the league and meet at Ironton next week.
Coal Grove is 4-3 and 2-2 in the OVC. The Hornets cannot afford to lose another league game if they want to keep any hopes of tying for the league title.
As for the Ohio High School Athletic Association computer ratings, Ironton sits fourth in Region 19 of Division V. Coal Grove currently sits 14th in Region 23 of Division VI and needs to win out to keep its flickering playoff hopes alive.
Coal Grove got its first-ever win over Ironton last season, 28-6. It was key in winning the OVC and making the playoffs.
This season’s matchup is almost a reversal of last year. Coal Grove had a veteran team but has had to replace a lot of starters.
Ironton suffered numerous injuries last season and played a young lineup against Coal Grove. However, that experience has paid off as the Fighting Tigers are sitting at 5-2 and should already have locked up a playoff spot. They are now playing to secure a home game.
But the Hornets have played well. They lost to Portsmouth West — ranked 10th in the Association Press — 21-14 after leading late in the game.
Although West rallied to win, Coal Grove missed on other scoring opportunities which sends up a red flag for Ironton not to overlook the Hornets for next week’s showdown.
Coal Grove has an excellent skill set of players on offense led by senior quarterback Nate Harmon (6-2, 190), sophomore fullback Austin Stapleton (5-10, 220) and senior wide receiver Aaron Music (6-1, 185).
Senior running back Kyle Sites (5-8, 160) and senior receiver Jaylen McKenzie add speed as does senior Evan Holmes (5-11, 170) who can play fullback or receiver.
Senior Greg Keeney (5-10, 170) is the tight end and senior Jalen McKenzie (5-10, 170) is out for the first time this season and has been a pleasant surprise addition.
The Hornets took their biggest graduation hit on the offensive line that included All-Ohio and North/South selection Jeb Jones.
Sophomore Ben Compliment (6-2, 240) is one returning starter who has moved from tackle to center. The other returning starter is junior Reece York (5-9, 245) at guard.
The other starters are expected to be sophomore Kye Robinson (6-0, 220) at left tackle, junior Evan Gannon (5-11, 190) at left guard and junior Justin Castle (5-8, 215) at right tackle.
The defense was the strong point of the Hornets team last season but graduation took nine starters including All-Ohio linebacker Kimo Baldwin and Jones.
The secondary is a strength with Harmon — he has caught the eye of Marshall University — and Music the safeties while McKenzie, Sites and Holmes rotate at the corners.
Actually, the Hornets rotate a lot of players in an effort to keep them fresh.
Compliment is the left end while junior Joe Strange (5-11, 165) and Holmes and played the other end.
Stapleton is one inside lineman who can play end. Rotating inside are Castle, York, Gannon and junior Jeremiah Rice (5-7, 185). Linebackes are junior Austin Stormes (5-11, 175), sophomore Trey Hunt (5-10, 190), Keeney and Holmes who also handles all the kicking.
Ironton is led by sophomore Reid Carrico with 907 yards on 124 carries. He has scored 11 touchdowns including one on a blocked punt and the other on a pass.
Junior quarterback Gage Salyers is 39-of-83 passing for 628 yards and eight touchdowns. He has been intercepted just three times.
Salyers has also rushed 63 times for 319. He has scored eight touchdowns.
Junior fullback Seth Fosson — a bruising blocker — has rushed 42 times for 310 yards and he has four touchdowns, one by a pass.
Senior Brycen Thomas has nine receptions for 205 yards and three TDs and junior Jordan Grizzle has nine catches for 152 yards and a TD.
Kickoff is 7 p.m.