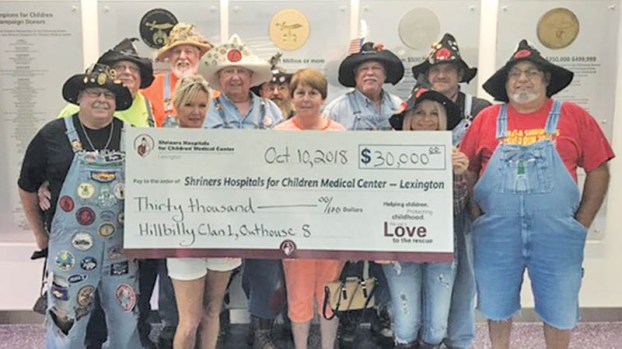 Members of the El Hasa Shriners Hillbilly Clan, Outhouse 8, of Ironton, presented a check for $30,000, comprised of donations received in Lawrence County, to the Shriners Hospitals for Children Medical Center in Lexington, Kentucky on Wednesday.

LEXINGTON, KENTUCKY — Members of the El Hasa Shriners Hillbilly Clan, Outhouse 8, of Ironton, traveled to the Shriners Hospitals for Children Medical Center on Wednesday to deliver the results of two years of fundraising.

The group presented a check for $30,000 to the hospital, comprised of funds from the group’s fundraising activities in Lawrence County and the surrounding region.

“This came from the people of Ironton and Lawrence County,” Roger Morgan, with the group, said.

He said funds were raised from events, such as the group’s golf tournament, ticket raffles, hot dog sales and children’s penny drives at South Point Elementary and Rock Hill Preschool over the past two years.

“We appreciate the local support,” Morgan said. “They’ve been so generous with their donations.”

He said the group was given a tour of the orthopedic hospital and were thanked by officials there.

“By thanking us, they were thanking the people of Lawrence County,” Morgan said.

He said the funds will go to a playground and building, set to open in May, and that the hillbillies will have their name on a gate and piece of equipment there.

The group’s next appearance will be at the South Point Halloween parade, set for Oct. 26 at 12:45 p.m. The school will kick off its penny drive that week.

They will also be selling hot dogs and Shriner Burgers at the Turkey Run at Rush Off Road in Kentucky on Friday, Nov. 23.

The hillbillies, who have outhouses across the country, launched in 1970.

Morgan said the group learned at a recent convention in Charleston that the 50th anniversary of the movement will bring a celebration in Ashland in 2020, featuring clans from across the country.

State Route 650 in Lawrence County has been reopened at the U.S. 52 overpass at Hanging Rock following a bridge strike... read more