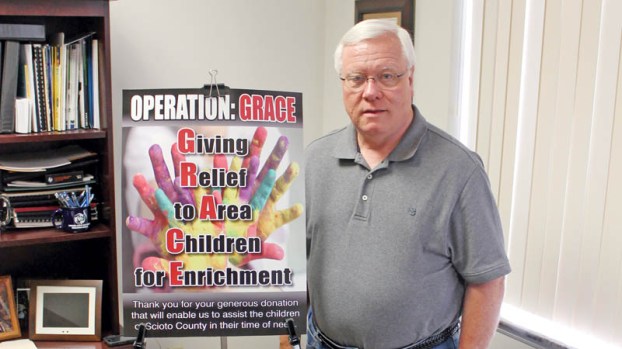 Dan Palmer, director of the Lawrence-Scioto Solid Waste Management District, was a recipient of the Jenco Award from the Foundation for Appalachian Ohio for his Operation GRACE program in Scioto County.

The Foundation for Appalachian Ohio’s Jenco Awards honor Father Lawrence Martin Jenco’s legacy of selfless service to others, and recognize individuals for direct, caring action that contributes to the quality of life of individuals living in Appalachian Ohio.

One of this year’s six recipients was Dan Palmer, director of the Lawrence-Scioto Solid Waste Management District, for the Operation GRACE program he began in Scioto County two years ago to help children affected by the drug epidemic.

The program receives donations from local individuals and businesses, and helps provide Scioto County children in need with clothing, hygiene products, bedding and more, including providing laundry and even a place to shower in some cases.

Palmer said that currently the program serves more than 200 children in nearly all of the public schools in the county, who are identified through their schools or through working with the juvenile court system.

The Jenco Foundation Fund and its award are named after Father Lawrence Martin Jenco, a Roman Catholic priest who committed his life to the service of others. Most notably, in the 1980s, Father Jenco served as the director of Catholic Relief Services in Lebanon, where he was eventually kidnapped and spent 19 months in captivity.

While in captivity, Father Jenco continued his service by providing a necessary listening ear for detainees, which included journalist Terry Anderson. As a way to honor Father Jenco’s legacy of compassion, following Jenco’s death in 1996, Anderson created the Jenco Foundation.

“I’m just really honored to have been chosen as a recipient of this award,” Palmer said.

Palmer also said that he received a few recent donations for the program, including a $2,000 donation from an anonymous donor, $1,000 from Larry and Lenny Livingston, owners of  Livingston Scrap Metals in Portsmouth, and commitment for the second year in a row from Dr. Bill Miller, Professor of Epidemiology at The Ohio State University College of Public Health, and some of his students to donate shoes and clothing for about 40-50 children before Christmas this year.

People driving by the Lawrence County Courthouse have probably noticed a wooden structure around the Fourth Street entrance, a huge... read more