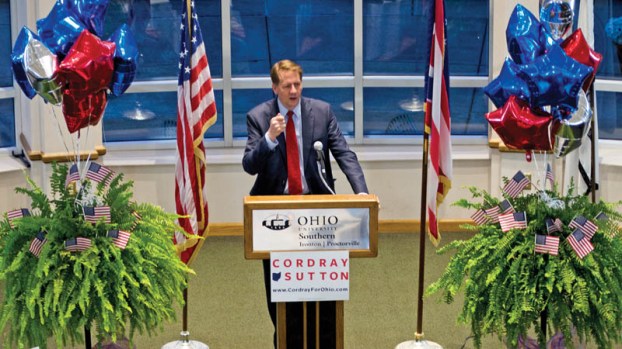 “I believe this is the start of a blue wave in Ohio,” Lawrence County Treasurer Stephen Dale Burcham said to the crowd gathered in the Mains Rotunda at Ohio University Southern on Sunday.

Burcham, who was named chair of the Lawrence County Democratic Party earlier this year, was opening the party’s annual fall fundraising dinner, which was keynoted by gubernatorial nominee Richard Cordray.

He echoed the hopes of Democratic officials nationwide for the fall general election, when he predicted gains by his party, starting in Lawrence County, “the southernmost point in Ohio” and “sweeping all the way to Lake Erie.”

“I think we’re going to elect a lot of Democrats this year,” he said.

Cordray, the former head of the U.S. Consumer Financial Protection Bureau, who once served as the state’s attorney general, solicitor and treasurer, is running with lieutenant governor nominee Betty Sutton in a tight race against Republicans Mike DeWine and Jon Husted. The most recent polling in the race have shown the candidates in statistical tie.

He spoke of his parents, who worked with developmentally disabled children, who he said helped to “raise the quality of life.”

“They set a really strong example for me,” he said. “What makes the quality of life what it is are the people who got to work to make things better.”

He pointed to community servants from police to firefighters to those engaged in battling the opioid epidemic across the state.

Cordray said that while he doesn’t think “government is the answer to all our problems,” he still felt it had a role to play as a “framework for understanding our challenges.”

He said, while the economic news has been focused on high numbers for the stock market and low unemployment, there is still economic anxiety.

“People are worried about the future and the future of their children,” Cordray said. “They’re trying to cope, when wages seem flat and costs are rising, particularly health care costs.”

He cited his work, both as attorney general in advocating for citizens against “big banks and predatory lenders.”

“Wall Street crashed and hurt pensions in the state and we went after the big companies,” he said, stating his office recovered “over $2 billion” for workers, retirees and investors.

“We stood up for Ohioans who needed protection,” he said, adding that this advocacy continued in his work with the White House’s consumer protection office.

“We gave people a voice,” he said.

He drew a contract with his opponent.

“Mike DeWine has always stood with corporate special interests,” Cordray said. “He’s had a political career for 42 years. The record is clear. Nothing is going to change.”

He said DeWine was a believer in “trickle down economics.

“That has never worked and things have never trickled down for Ohioans,” Cordray said.

Cordray said, as governor, he would seek to tackle the issue of gerrymandered legislative districts, which he said have been drawn to benefit political parties.

“That’s against democracy and the voters should be in charge,” he said.

He also raised the scandal involving the charter school, the now-shuttered Electronic Classroom of Tomorrow, which was ordered to repay the state $60 million in overpayments.

“Nobody was minding the store,” he said of ECOT.

Cordray said he also wanted to improve infrastructure, focusing on roads and bridges and access to broadband.

He said broadband access is both an economic development issue, as well as one affecting education.

“It’s about fairness for students,” he said of rural areas where service is not readily available. “It’s been promised for a long time. We need to deliver.”

On issues affecting rural areas like Lawrence County, Cordray said he would like to bring local funds back from Columbus for services and projects, as well as focus on aiding farmers.

“They’ve been squeezed hard,” he said.

On the opioid epidemic, Cordray said a change in leadership is needed.

“We need to look at what is not being done,” he said, stating his opponent represents the “status quo” and that the state needed to “crack down on Fentanyl,” which is present in many overdose deaths.

McCollister was one of many Democratic candidates to speak at Sunday’s dinner, with his speech garnering much enthusiasm from the crowd, leading Burcham to say it sounded like one a future governor candidate could give.

McCollister, a former Rock Hill teacher and coach who is running against Republican incumbent Freddie Hayes Jr., walked the crowd through past accomplishments of the party at a national level, from Social Security under Franklin Delano Roosevelt to the G.I Bill under Harry Truman, which he said “created the modern middle class.”

He cited local examples, such as the creation of Lake Vesuvius and the construction of the Ironton floodwall during Depression era programs.

“It’s about people at the top vs. people at the bottom. They made people’s lives better,” he said of the Democratic approach to politics, which he said was “a vision to lead.”

“We need to be proud of our legacy and stand up for it and trumpet what we believe because it is right.”

Waterloo Wonders to be honored today