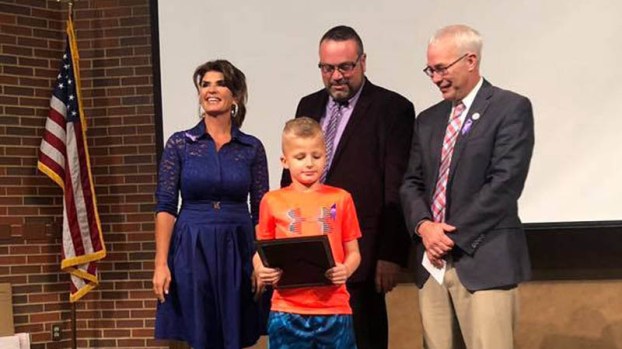 Lawrence County Commissioner DeAnna Holliday speaks to Braylon Lewis, who reported a domestic violence situation at a football game to a deputy, as commissioners Freddie Hayes Jr. and Bill Pratt look on during the 10th annual Domestic Violence Awareness Program in the Bowman Auditorium at the Ohio University Southern campus on Tuesday.

The Lawrence County Commission recognized nine-year-old Braylon Lewis, of Ironton, at its meeting Tuesday for an act of bravery Lewis displayed at a recent Ironton football game.

Lewis saw a female being abused at or near the stadium, and reported the incident to a nearby Lawrence County Sheriff’s deputy. The commission approved a proclamation recognizing  Lewis for his act to help a young woman in need, and displayed him with it at a Lawrence County Domestic Violence Task Force event later Tuesday evening.

Symmes Valley schools were also recognized for their State Report Card and having the best overall score in Lawrence County, and Superintendent Darrell Humphries spoke on the honor at the meeting. The commission approved a proclamation recognizing the district.

• Received and filed the correspondence from Judge David Payne regarding out-of-county secure detention housing costs for juvenile offenders. The estimated cost for calendar year 2019 is $70,000.