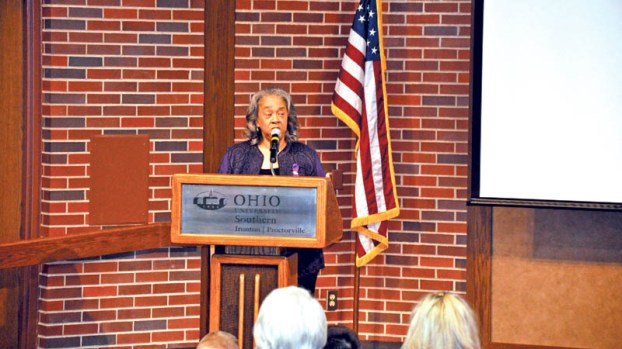 Elaine Payne, the director of the Lawrence County Domestic Violence Shelter, speaks during the event.

Every October, the Lawrence County Domestic Violence Task Force collaborates with Ohio University Southern to draw attention to domestic violence and, on Thursday, they held their 10th annual Domestic Violence Awareness Program in the Bowman Auditorium.

The theme this year was “It Shouldn’t Hurt to be a Child.”

To draw attention to the issue of domestic violence, OUS students made T-shirts with handwritten sayings, including “shatter the silence,” “Love Over Violence Everytime,” and “childhood should not hurt.”

The shirts were hung in the lobby of the building as part of the Clothesline Project with different colors representing victims of different types of assault, abuse and violence.

As part of the event, Elaine Payne, the director of the Lawrence County Domestic Violence Shelter, brought to the stage nine-year-old Braylon Lewis.

He was at a recent Ironton High School football game, when he saw a man roughing up a woman and brought the situation to the attention of a Lawrence County Sheriff’s deputy.

For his actions, the Lawrence County Commission issued a proclamation for his bravery in helping a woman in need.

Beth Bell, a shelter advocate with the Lawrence County Domestic Violence Task Force, said it was amazing that Lewis had the presence of mind to take action.

“We are so proud of him, he knew what to do and to keep himself safe at the same time,” she said, adding that man ran off when the deputy approached him and the woman thanked him, saying he helped save her.

Bell said that Lewis handled going on stage before a group of people quite well.

“He took the microphone and told everyone what he did,” she said. “He did really well. He was very happy. He said he felt like a celebrity because everyone wanted their picture taken with him. He said he did what he was taught to do.”

And this year, rather than doing a balloon release to honor the victims of domestic violence, there were paper bag luminaries with hearts along the walkway to Bowman Auditorium.

“We figured it was a better visual than balloons for people to see throughout the event,” Bell said. “They are lit up and people could see them, they knew that it represented survivors and victims of domestic violence.”

Bell said they would continue to have this event every October, which is National Domestic Violence Awareness Month.

“If we can reach one person to help change a life, it is worth it to us,” she said. “We are passionate about this cause, whether it is a child or an adult.”

The task force provides shelter, clothing, and more to domestic violence victims and their children. They also have programs to help them get medical help, get job skills, counseling child care and transportation to help them get back on their feet.

The group is always looking for donations of food, money or toiletries for their shelter. Donations may be sent to the LCDVTF at P. O. Box 311, Ironton, Ohio, 45638.

The Lawrence County Commission recognized nine-year-old Braylon Lewis, of Ironton, at its meeting Tuesday for an act of bravery Lewis... read more