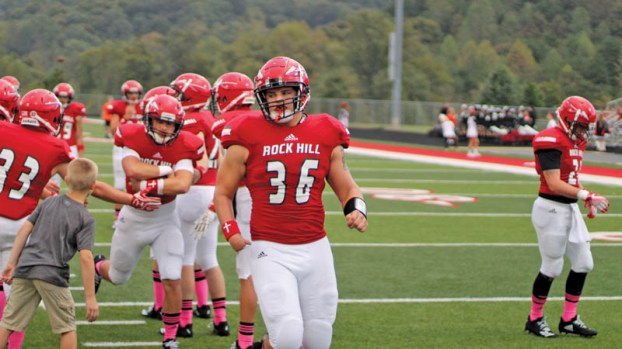 After playing most of his high school career on the offensive line, Rock Hill fullback TJ McGinnis, #36, has made the transition to the backfield.

A sense of pride

Rock Hill Athlete, born with one hand, excels in football and track

If you have been around the game for a long time, it becomes almost second nature to be able to see a football player when you come across one.

It is hard not to take notice when the Rock Hill Redmen line up in the T formation, anchored by their 6’2” 250-pound fullback.

TJ McGinnis is just that, a football player.

Fans have become accustomed to the bruising blocks and powerful runs, but there is something about McGinnis other than his play on the field that is impossible to overlook. TJ has one hand.

McGinnis was born with a rare condition that caused him to be without a right hand and only small shrunken digits attached to his wrist.

“I went down to Lexington Children’s Hospital and they couldn’t figure out what was wrong, but they knew before I was even born that I would be missing a limb,” McGinnis said. “Usually, when a boy has one hand, they normally have chest issues and their chest will collapse, so I guess I got the better half of it.”

McGinnis was born with only a left hand, but there may as well have been a ball in it. As soon as he was of age, McGinnis signed up for tee-ball, and his love of sports soon followed after.

McGinnis would alternate from being behind the plate at catcher to on the mound at pitcher.

“I would catch the ball in my left hand, then flip my glove off and throw it,” McGinnis said. “By the end of it, I got pretty smooth.”

While he might be on the same field as the others, McGinnis is far from average.

“It’s kind of freaky to be able to see some of the things that he can do,” Rock Hill head football coach Mark Lutz said. “In the past three years, he’s never missed a day of summer weight lifting, and that speaks volumes about his character.”

McGinnis boasts a 355-pound bench press, and can power clean over 200 pounds with one hand, making him one of the stronger players on the team, and he is not just a freak in the weight room.

After playing most of his high school career on the offensive line, McGinnis has made the transition to the backfield.

“TJ is the type of kid that will do anything that is asked of him, and I approached him in the off-season about transitioning to fullback,” Lutz said. “I told him if you get to where all they see are knee pads and shoulder pads, they’re going to have a tough time tackling you.”

Unfortunately for defensive players, McGinnis listened as he has rushed for 620 yards on 96 carries through seven games.

Not only has McGinnis excelled on the football field, but also as a track and field athlete at Rock Hill. McGinnis is closing in on the discus record of 160 feet at Rock Hill and hopes to possibly throw in college.

“I’d love to play football in college, but I’ve always seen track as my safety valve,” he said. “If I don’t make it in football, I’ve got track.”

McGinnis helped guide the Redmen to a 2018 OVC Championship, and has high praises from his coach, Todd Knipp.

“Shaquem Griffin gets a lot of press, but I’ve been fortunate to see it every day,” Knipp said, comparing McGinnis to the one-armed Seattle Seahawks linebacker. “I guess the best compliment I could give TJ is that as good of an athlete as he is, he is a better person.”

McGinnis doesn’t see his condition as a disability or a hindrance, but rather a sense of pride.
Hashtags on his Instagram posts depicting him running over defensive backs say “#nubnation” and “#dontneed2.”

These pictures may show a one handed kid, but they also show something else.

They show exactly what TJ McGinnis is: a football player.

Come get your scares