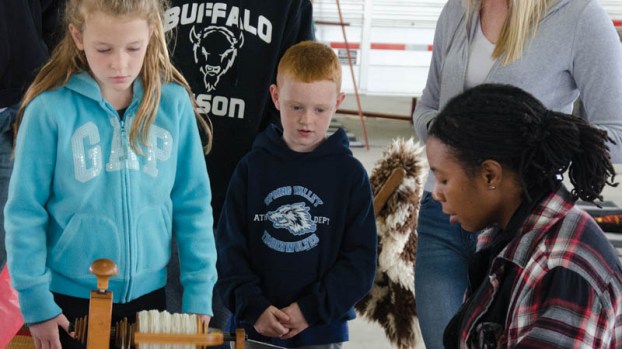 Lawrence County is known for its farming and, on Saturday, attendees at the Lawrence County Fairgrounds got a chance to see just what is produced throughout the region.

The first Bringing the Farm to You event took place, organized by the Lawrence County Farm Bureau.

One of the booths set up was Good News Llamas and Back Porch Fibers, run by Tom and Judy Ross, of Chesapeake.

They had their animals on hand, as well as yarn and other products made from the animals’ dyed hair, while spinning demonstrations took place.

Another was Tarheelbilly farm, of Willow Wood.

Ben Walker said they came up with the name to reflect the Appalachian and North Carolina heritage he and his wife bring to it.

The couple produces maple syrup, does beekeeping, raises sheep, chicken and are starting on a herd of cattle.

“We’re chemical free,” the Walkers said of their products, which also include soap and fibers.

Also on hand was the 4-H extension office of the Ohio State University, which coordinates 4-H and FFA clubs programs throughout the county, culminating in the competitions at the Lawrence County Fair each year.

The farm bureau has offered a Drive it Yourself farm tour in past year, but decided to move the event to a central location for this year’s inaugural event.

“This lets everyone see that we’re here and just what there is in Lawrence County,” Judy Ross said.