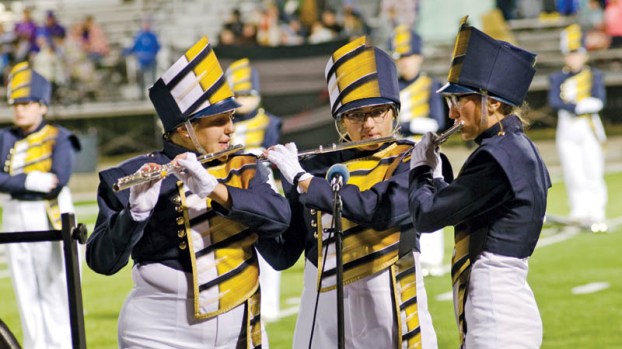 Members of the South Point High School Band of Gold perform at the Buckeye Classic in Tanks Memorial Stadium at Ironton High School on Saturday. Led by drum major Abbi Liveley, the school took home the title of overall grand champion for its show, “The Ninja.”

The 2018 Buckeye Classic at Ironton High on Saturday drew 13 schools to participate in the marching band competition, with South Point taking the top honor and being named overall grand champion.

The Band of Gold, led by drum major Abbi Lively, won for their show, “Ninja,” also topping their Class AA category, in which they competed against Russell High School.

The competition, launched in 1987, is in its 32nd year and includes, between band members, color guard, dance lines and majorettes, more than 800 performers and draws 2,500 spectators to the Tanks Memorial Stadium, according to Jeff Sanders, the band director for Ironton High.

Schools taking part are rated for band, percussion and auxiliary units and are grouped according to school size.

Shows came in all varieties, such “Masterpiece,” by Ross High, which centered around works of art or Valley High’s performance, themed to Disney’s “Moana.” One particularly well received by the crowd was Point Pleasant’s “The Greatest Showman,” which used circus imagery to match the P.T Barnum biographical film it drew from.

The weather at the start of the five-hour event was sunny and seasonable, but, as the night set in, so did rain showers and, in the final hour, just as Portsmouth West was about to perform, windy conditions developed into high level gusts, knocking people to the ground and blowing over equipment and props.

Several attendees said they saw the large flagpole that towers in the background of the field noticeably bending in the wind.

Organizers called for a delay and performers and crowd members were moved into the school’s gymnasium for safety.

The decision was then made to end the event and clear the stadium.

West Portsmouth, who would have competed in the AA category, returned home. Also canceled in performing was Ironton, who, as host school, does not compete in the event, but normally close the festivities.

High winds, with gusts exceeding 60 mph, were reported throughout the Tri-State Saturday, with power outages hitting throughout the region. AEP reported 35,000 customers without service, with the bulk of those in West Virginia.

After the winds died down, Sanders held a makeshift awards ceremony in the gymnasium, where performers and family were packed inside.

“I don’t think I’ve ever experienced wind like that at a band competition,” he said, stating they decided not to return to the field because the north wall of the stadium had bowed in during the wind.

“Right now, it’s structurally unsound,” he said. “There’s no way we could put a crowd back in there tonight.”

Trophies were handed out to those still attendance.

In Class A, Ross won for band and percussion, while Point Pleasant won auxiliary.