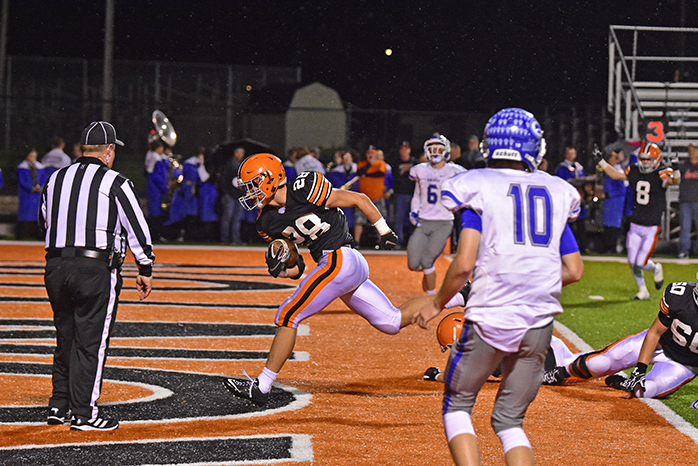 Ironton Fighting Tigers’ sophomore running back Reid Carrico (28) scores a touchdown in the first half of last week’s game against Gallipolis. Carrico had two touchdowns as he ran for 103 yards in a 36-33 loss. Ironton visits Portsmouth on Friday. (Kent Sanborn of Southern Ohio Sports Photos)

The No. 1 assignment for the Ironton Fighting Tigers will be No. 1.
The No. 1 jersey is worn by Portsmouth Trojans junior running back Talyn Parker who has carried the football 207 times this season for 2,106 yards or a 10.2 yards per carry average.
Yes. He is averaging a first down each time he touches the ball.
Parker will be in the sights of the Ironton defense this Friday when the Fighting Tigers visit their rival Portsmouth in a key Ohio Valley Conference game.
Although the league title has been settle with Gallipolis expected to claim the championship after a 36-33 win at Ironton last week, playoffs are on the line for both teams.
Ironton is a virtual lock in Region 19 of Division V but they are playing for a home game. Portsmouth needs a win to get a playoff berth in Division V Region 20.
With his name on the Ohio State Buckeyes recruiting list, the 5-foot-10, 185-pounder Parker has been virtually unstoppable this season.
“Portsmouth is going to be a tough task. Parker is a great athlete. They’re big up front. We’re going to get everyone’s best shot,” said Ironton coach Trevon Pendleton.
Ironton’s defense has been tested all season by teams with a plethora of weapons. Portsmouth is unique with one major weapon who seems to defy the odds.
Portsmouth (6-3, 4-2) has some other weapons who don’t get much notoriety because of Parker.
Junior fullback Tyler McCoy (5-8, 175) has proven to be a solid runner who battles for extra yards. Senior quarterback Danny Lattimore (6-1, 170) has good running skills and throws only when need to either junior Bryce Wallace (6-2, 155) or freshman Dariyonne Bryant (5-11, 145).
The offensive line lacks experience but is anchored by 6-4, 280-pound senior Colin Boehm.
The center is senior Tanner Queen (6-2, 220), the guards senior Bryson Morrow (6-1, 215) and junior Austin McKenzie (5-8, 200) while senior Ben Lester (5-9, 275) is the other tackle. The tight end is senior Parker Johnson (6-2, 255).
Portsmouth’s base defense is a 4-3 with senior Brian Knipp (5-11, 170) and junior Chris Jenkins (5-10, 195) the end while McKenzie and senior Tyriek Carr (6-0, 365) are the tackles.
Morrow and senior Ty Pendleton (6-0, 180) are the outside linebackers and McCoy is in the middle.
The secondary had Parker and junior Eric Purdy (5-8, 155) the corners with Wallace and senior Stefan Johnson (5-7, 135) the safeties.
Ironton (6-3, 5-1) leads the series 59-56-8, but Portsmouth won a thriller last season 42-35 to snap a 3-game Ironton winning streak. The Fighting Tigers have won 8 of the last 10 and 12 of the last 15.
In last season’s game, Ironton was riddled with injuries and had only three starters in the lineup when Portsmouth came to town. The Fighting Tigers fell behind 28-0 in the second quarter before mounting an amazing comeback that tied the game at 35-35.
But Parker’s 45-yard run gave the Trojans the lead and then Ironton was stopped at the 2-yard line on the final play of the game.

OHSAA Football Computer Ratings Top 8 from each region in the final report Oct. 29 will qualify for the playoffs.... read more