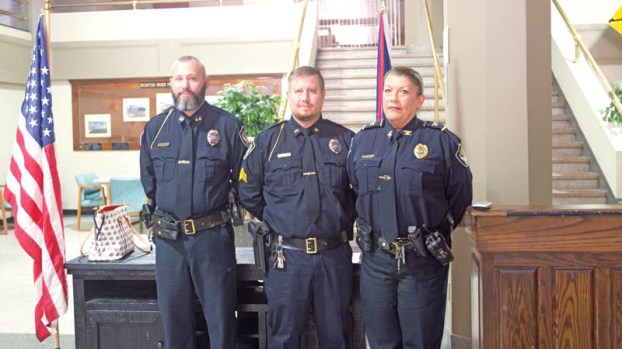 On Monday evening, two Ironton Police Department officers were promoted. From left, Sgt. Brian Pauley was promoted to captain and will be the supervisor on midnight shift and Patrolman Steve Wilson was promoted to sergeant. They posed for pictures with IPD Chief Pam Wagner after the promotion ceremony in the Ironton City Center.

On Monday night, the Ironton Police Department promoted two of its officers.

At a small ceremony attended by the mayor, fellow officers, family and friends, Patrolman Steve Wilson was promoted to sergeant and Sgt. Brian Pauley was promoted to captain.

They will now be the officers in charge of the midnight shift.

“I’m very proud of these guys,” said IPD Chief Pam Wagner. “They have worked very hard. They have went ahead and continued their education in law enforcement with training and have stepped up above and beyond.”

He has gotten two commendations, one for valor in 2007 when he and other officers arrested a man with two knives who was threatening his family members.

The second was commendation for valor was in 2011 for the arrest of an armed suspect who had broken into Bob Clyse Auto Sales.

Wilson joined the IPD in 2006. He became the department’s evidence officer in 2012 and still holds that position. In 2013, he was assigned to the Lawrence County Drug Task Force.
Mayor Katrina Keith said she was happy to see the men promoted.

“I am excited to advance officers who have been here for awhile, that are committed to protecting and serving the citizens of Ironton,” she said. “I truly appreciate the commitment you two have shown Ironton. We appreciate what you do, day in and day out. We know the sacrifices you make.”

Wilson said he was very excited by the promotion.

Pauley will remain partnered with Goose and is also looking forward to his new responsibilities.

“I’ve been a sergeant since 2009 and I’ve got a pretty good group of guys here at the department on the midnight shift,” he said. “Sgt. Wilson will be my sergeant and I think he will be a good asset to help me.”

With less than two weeks to go until the Nov. 6 general election, many Lawrence County voters are casting their... read more