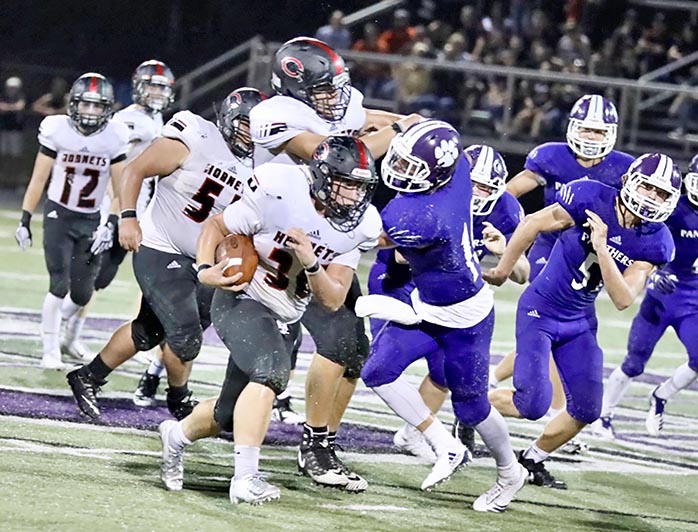 Most things have been settled, but week 10 of the high school football season still has plenty of drama.
Playoffs are always on the minds of players, coaches and fans of contending teams. But those teams who have been eliminated from playoff contention are focusing on opposing rivals.
The top rivalry game with something at stake is the Ohio Valley Conference matchup that has the Fairland Dragons visiting the Chesapeake Panthers.
Fairland (5-4, 3-3) has a chance of making the Region 15 Division IV playoffs with a win. Chesapeake (5-4, 3-3) has a very slim chance to make the playoffs but the Panthers would love nothing better than to spoil their rivals’ playoff plans.
The Dragons sit seventh in the current Ohio High School Athletic Association computer ratings. Philo is sitting eighth and should beat New Lexington.
The monkey wrench in Fairland’s plans come from Licking Valley who plays 6-3 Licking Heights. Licking Valley should be a touchdown favorite but the game is still too close to call.
If all three teams win, it should be a photo finish.
The only thing on the line for the Rock Hill Redmen and Coal Grove Hornets is pride.
Rock Hill (2-7, 1-5) has been plagued by turnovers and the lack of a passing game all season but the Redmen have been very competitive and could have had more wins if not for their turnovers.
Coal Grove (4-5, 2-4) has good balance with its offense with Nate Harmon at quarterback, Austin Stapleton at running back and wide receivers Aaron Music, Jalen McKenzie and Evan Holmes.
The other OVC game has first-place Gallipolis (8-1, 6-0) hosting the South Point Pointers (0-9, 0-6). The Blue Devils are heavy favorites to wrap up their first league title.
In the Southern Ohio Conference, the Symmes Valley Vikings are looking to finish strong with a win over Northwest and give them a 5-5 record on the season.
Northwest enters the game 1-8 but the Mohawks only win was 35-14 over Portsmouth Notre Dame, a team the Vikings beat only 15-14.
Symmes Valley has been close in several losses including 22-15 to Green and 22-18 at Sciotoville East last week.
Green (8-1, 4-1) can earn a share of the SOC Division I title with a win over Oak Hill, but the Oaks are heavy favorites and can use the win to enhance their spot in the Region 19 Division V playoffs.
However, even if Green loses, the Bobcats will qualify for the playoffs and will probably play at Waterford.
Both Trimble and Waterford should win and stay 3-4 in Region 27 of Division VII. Belpre could leap frog Green if the Bobcats lose, but that may not matter because Belpre has the task of beating Worthington Christian which doesn’t look promising.

Ohio State using bye to fix some of their glaring problems