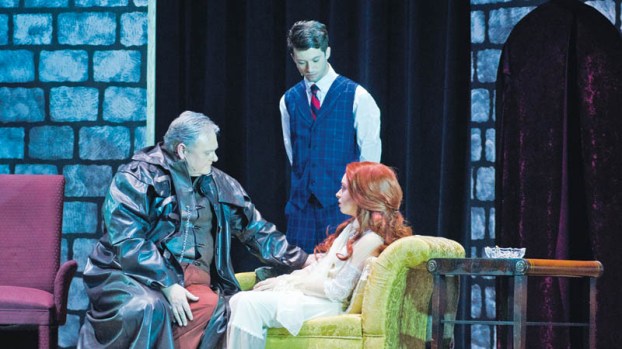 ASHLAND — Those wanting to get in the mood early for Halloween have a great opportunity tonight, as the Paramount Players will begin their two-day run of “Dracula,” including a special midnight performance.

The story has been adapted into several film versions, most notably starring Bela Lugosi, Christopher Lee and Gary Oldman as the Transylvania Count.

Director Melanie Cournelison-Jannotta says the Paramount’s production is based on Bram Stoker’s 1897 gothic novel and features a cast of 18.

“It’s dramatized for the stage, but it stays true to the book,” she said.

The cast is smaller and more intimate than the group’s musical productions, and Cournelison-Jannotta says the show will have some unique qualities.

“We’re going to be doing some special effects and tricks with lighting to create the right amount of atmosphere and make it scary,” she said.

Performances are set for 7:30 p.m. and midnight tonight and 7:30 p.m. Saturday at the Paramount Arts Center, located on Winchester Avenue in Ashland.

Starring as the title vampire is Barry Dailey, who audiences may remember from his performance as Atticus Finch in the group’s production of “To Kill a Mockingbird” last year.

Portraying the monster’s nemesis, the vampire hunter and professor Abraham Van Helsing, is Mark Baker, who starred as Cogsworth in last year’s “Beauty and the Beast” at the theater.

Portraying another of Dracula’s adversaries, Jonathan Harker, is Sam Perkins and starring as his fiancé, Lucy Seward, whom Dracula seeks for his bride, is Samantha Young.

The tormented and mad inmate Renfield is portrayed by Bruce Dearfield, a recent addition to the Players and fresh off lead performances as Gomez in “The Addams Family” and Alex the Lion in “Madagascar.”

Rounding out the main cast are Abigail Ralston as Dracula’s first victim, Mina (her role switched with Lucy from the book). Paramount mainstay Tyler Bradley as Dr. Seward, Lucy’s father, Ammie Ruddle as the family’s maid, Alex Messer as an attendant and Annabella Hensley, Emma Hensley and Ella Carr as three young victims of Mina.

The show is rated PG-13 for horror elements.

Tickets are $25 in advance, and an additional $2 at the door. They can be purchased on the theater’s website, www.paramountartscenter.com, at the box office or by calling 606-324-0007.