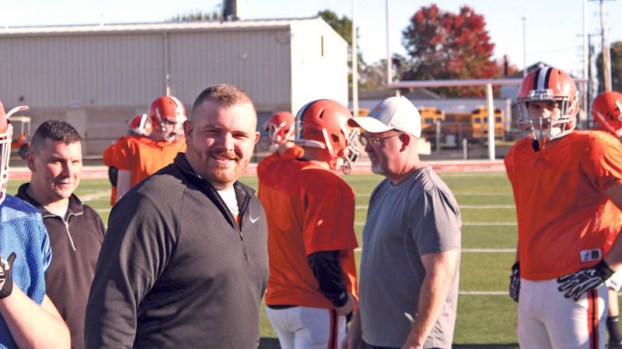 New Ironton High School Fighting Tigers football coach Trevon Pendleton says that football has been a big part of his life and being a coach is an opportunity to use his platform to give back to the kids.

By Will McCollister, Tribune contributor

In the fall, the town of Ironton shuts down on Friday nights.

Kids stand along the railing of Tanks Memorial Stadium that separates them from Bob Lutz Field, in the shadows of the state championship banners that hang overhead as the chant of “T-I-G-E-R-S” echoes throughout the stands.

The tradition at Ironton is something near and dear to hearts of loyal Tiger fans, and that is something that new head coach, Trevon Pendleton, has embraced.

Growing up in Portsmouth, football was a way of life for Pendleton. The son of a coach, Pendleton was an All-State running back for the Portsmouth West Senators, and went on to play fullback at Michigan State University.

“My dad was a coach for 20 plus years, my brother played and became a coach,” said Pendleton, “Football has always been a huge part of my life, and I credit a lot of things I’ve done in life to football, and this is an opportunity to use my platform to give back to the kids.”

Football is a part of Pendleton’s DNA, much like it is in the DNA of the city of Ironton, and the tradition that the Fighting Tigers have is what attracted Pendleton to the job.

“The history and the culture drew me in, and I know how much football matters in this part of the state, especially in Ironton, so for me it was a no-brainer,” Pendleton said.

While it was a no-brainer for Pendleton, it was not an easy job to inherit.

A long history of winning is a positive in many aspects, but that also can be a double-edged sword.

A demand for excellence comes along with this history, and coming off a 4-6 season and seven years without a playoff victory, the fans of the Fighting Tigers were longing for the dominant days of old, and that is what Pendleton has been trying to reestablish.

“We needed direction and we needed to all be on board and rowing the boat in the same direction,” Pendleton said, “Our mantra for this year has been ‘All In’ and we’ve started focusing on our team goals, and in turn we have been able to accomplish individual goals as well.”

The players have welcomed this culture, and Pendleton credits the seniors on the team for the turn around.

“Brady Rowe, Hunter Humphreys, Ethan Duncan, Ayden Barnes, Brycen Thomas” Pendleton said, proudly reciting the names of the seniors who have taken a leadership role on the team. “Those guys have just stepped up and have done a great job of setting the standard for the program, and I think it will continue to trickle down to the classes behind them.”

The Tigers have been successful this season, as they are 6-3 going into a week nine showdown with rival Portsmouth, with the possibility of locking down a playoff berth. But for Tigers fans and their new coach, this new trend is only the beginning.

“A playoff berth is something at the beginning of the year we set out to do,” said Pendleton.

But for those that know Ironton football,that is expected, and the desire for more banners will always be the goal for the Tigers.

“We don’t want to make the playoffs and just be one and done, we want to make some noise in there,” said Pendleton, “Our goal is to get three percent better everyday, and if we can do that we can get back to being a contender on the state level.”

The brisk Ohio fall air still blows through Tanks Memorial Stadium, where local legends used to dominate the competition. On the sideline of the field named after the winningest coach in Ohio high school history, there stands a new coach willing to embrace that tradition, with new faces along his side ready to take the field for Ironton High.

Dracula stalks the stage of Paramount Arts Center ASHLAND — Those wanting to get in the mood early for Halloween... read more