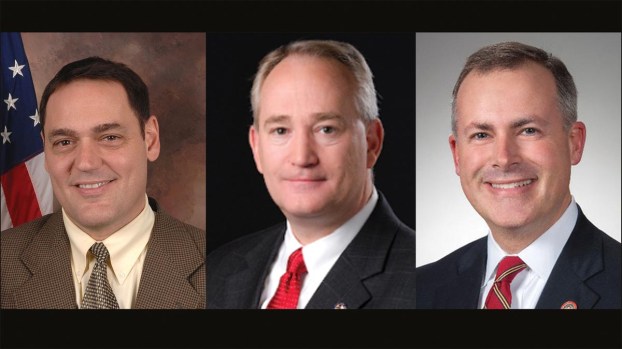 He says his goal is to represent people who have “been left behind.”

While stopping at the recent Meet the Candidates event at Collins Career Technical Center, he said he was hoping to “meet folks and communicate the message for change.”

It was Space’s fourth visit to the county this election season.

Space cites his upbringing in the Dover, a part of the Appalachian region of Ohio.

“So many of us either worked in the mines or the mills, or our families did,” he said. “We powered this whole nation, and the mills and the mines are gone because of these terrible trade deals that were entered into because of money for people outside this region.

Space said the political process “caters to wealth and the donor class” and said his opponent has received donations from payday lenders and other wealthy interests.

He said accountability needs to restored, following the scandal involving the Electronic Classroom of Tomorrow, a now-closed charter school that has been ordered to repay million to the state.

Space said he hopes to focus on gerrymandering in the drawing of political districts and to end the process favoring one political party and that the auditor sits on the board which will be a part of those decisions.

In summary, he said his goal is to let taxpayers know if their money is “being used to pay off the donor class.”

“When your dollars used for that, will say something about it,” Space said.

Keith Faber
A current representative and former president of the state Senate, Keith Faber is the Republican nominee for auditor.

“I want to look out the worst fraud and abuse,” he said of his approach to the office, which would he said be committed to transparency and doing things “better, faster and cheaper.”

Faber said, through use of performance audits, he believes he can save taxpayers more than $1 billion.

He said the first target for a performance audit would be for the auditor’s office itself, to try to improve its operation.

Then, he said he would focus on Medicaid.

“It’s 50 percent of the state budget,” Faber said, adding that he hoped to eliminate waste in the program.

“We also need to look at the way the state does IT contracts,” he said. “It can lead to ineffectiveness and waste.”

Faber said that by focusing on waste in state use of taxpayer dollars, it would lead to savings for local governments.

Faber also spoke out on Issue 1, a ballot measure before voters that would reduce sentence for some drug crimes.

He said he was opposed to the measure, which he said was “just crazy” and would hinder the state’s fight against the opioid epidemic by making possession of 19 grams of the drug fenatanyl, present in many overdose deaths, a misdemeanor.

Faber said judges need the have the ability to issue jail sentences “as a tool” to get compliance.

He accused Space of “dithering” on the issue before coming out in opposition to Issue 1.

Faber added, rather than adopt language through a constitutional amendment, which he said was organized by out-of-state efforts, reform in drug sentencing should be handled by the Ohio Legislature.

Faber said he believes leaders are willing to act.

“They normally start on criminal justice reforms in November,” he said, and also cited bipartisan work he had taken part in on the topic in 2014.

“We were ahead of the curve,” Faber said.

Robert Sprague
Faber’s fellow member of the Ohio House, Robert Sprague, of Findlay, is the Republican nominee for state treasurer.

He said his background in private finance and working overseas in the private sector has helped to prepare him for the job.

Like Faber, Sprague also opposes Issue 1, which he said Richardson is on record as supporting.

Sprague would follow current Republican state Treasurer Josh Mandel, who he said has “done a great job in the office, citing his implementation of the open checkbook program, which posts state and local government’s financial information online and says he would continue many of his policies.

Sprague said his work for Ernst & Young, a multinational professional services firm, involved him looking at ways companies operated and “finding ways to do better.”

“I’d like to do the same thing with the open checkbook,” he said.

Sprague said he would like to focus in particular on the opioid epidemic, and said he was motivated to run when a woman in Kenton told him of her daughter who had been going through rehab.

“You need to do something about this,” he said she told him.

Sprague said he would tackle the problem through “innovative financial measures,” such as the use of social impact bonds, which are a contract with government, in which it pays for better social outcomes in certain areas and passes on achieved to investors.

He said these could be used to increase treatment rates.

Faber, who visited Lawrence County earlier this election cycle, said he has known Sprague and worked well with him in the Legislature and this would continue with the auditor and treasurer’s offices.

“He’s one of the finest individuals I’ve met in government,” Faber said of Sprague.

The two were set to appear at events in Ironton on Friday evening.