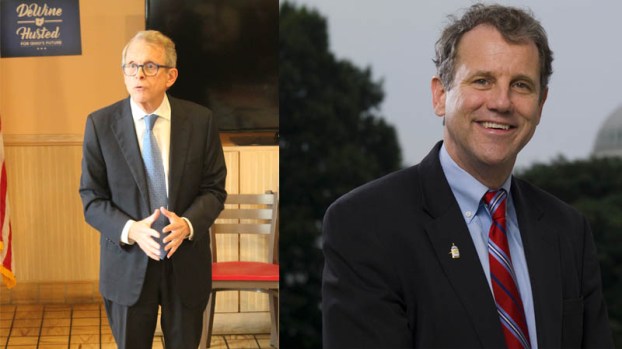 Issue one defeated by two-to-one margin

COLUMBUS — As the final totals came in Tuesday night, Republicans appeared to score a sweep of all but one statewide race.

With 97 percent of the vote in, DeWine was leading over Democrat Richard Cordray, a former Ohio attorney general and former head of the U.S. Consumer Financial Protection Bureau, 54 to 46 percent.

DeWine will follow fellow Republican John Kasich, who was term limited from re-election, in the office.

Brown’s victory in a Midwestern swing state that Republican Donald Trump won in the 2016 president will likely increase his profile in the party. He has been considered a possible 2020 candidate for president or vice president on the Democratic side.

In the race for the attorney general seat DeWine is vacating, Republican Dave Yost, who serves as Ohio auditor, was ahead of Democrat Steve Dettelbach, 53 to 47 percent.

In the open race for the auditor’s office, Republican Keith Faber, the former president of the Ohio Senate and a current state representative, had 50 percent of the vote to Democratic former U.S. Rep. Zack Space’s 46 percent. Libertarian candidate Robert Coogan pulled in four percent of the total.

And in a closely-watched race, Issue 1, which would have reduced penalties for possessing, obtaining and using illegal drugs, was defeated by voters, 63 to 37 percent.

The ballot measure had drawn opposition from many members of law enforcement and had bipartisan opposition from officials in Lawrence County, including Sherriff Jeff Lawless, Municipal Judge Donald Capper and Prosecuting Attorney Brigham Anderson.

In Lawrence County, votes were 82 to 18 percent against the proposal.

As part of a districtwide maintenance and vegetation management program, a tree trimming project has been scheduled this week on... read more