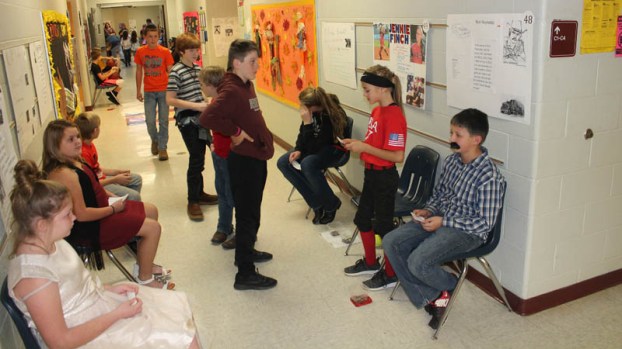 WILLOW WOOD — Fifth graders at Symmes Valley Elementary put on their first annual wax museum, dressing up as historical or famous figures to raise money for the school’s backpack program.

“We call it the coin wax museum,” Tara Schneider, fifth grade reading teacher at the school, said. “People drop a coin in their bucket to bring the character to life.”

She added that the money is then used to donate to the school’s backpack program, which provides food to students in need over the weekends.

Elvis Presley, Junior Johnson, Cleopatra, Orville Wright, LeBron James and Carrie Underwood were just a handful of those who the students portrayed as part of the museum.

Gage Scherer portrayed ATV Motocross racer Chad Weinen because he said he wanted to know more about him.

Wyatt Myers was Eddie Murphy as part of the project, and said he wanted to learn more about the actor and comedian after seeing a lot of his movies.

“He’s been in a lot of movies that I like,” he said. “So I wanted to learn more about what he’s done.”

Other grades from the school and district, as well as teachers and staff, went around to the different “wax statues,” and learned more about them when change was dropped in their respective buckets.

“It’s a good way to get the kids out of the textbooks and bring learning to life,” Schneider said. “The kids got to pick out who they wanted to be and did their own research. We’ve been working on it for about six weeks.”

This was the first year of the event at Symmes Valley, as well as Schneider’s first year teaching at the district after previously teaching at Dawson-Bryant, where she said she brought the wax museum exhibit idea from.

Hayes, Stephens re-elected in countywide sweep for GOP While national media were projecting Democrats were set to gain control of... read more