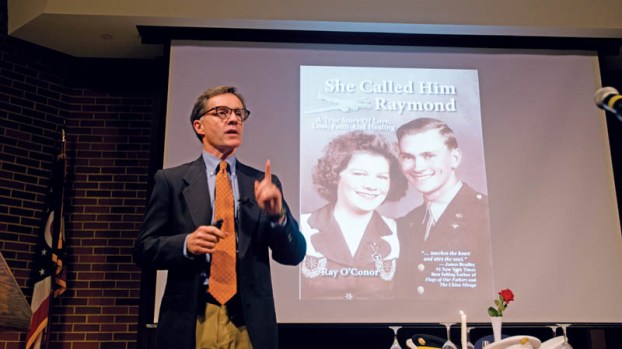 At Thursday’s Ohio University Southern’s Veterans Day Tribute ceremony, author Ray O’Connor told the assembled crowd about how his book, “She Called Him Raymond – A True Story of Love, Loss, Faith and Healing” came to be.

‘I have a story to tell you’

Author tells story of Ironton WWII pilot, who was his mother’s first husband, his namesake

At Thursday’s Veterans Day Tribute ceremony at Ohio University Southern, they honored not only the veterans in the audience, but those servicemen and women who never came home.

The presentation of colors was done by the VFW Post 8850 Honor Guard with the national anthem sung by Kim Kartes.

OUS Dean Nicole Pennington welcomed and thanked the crowd for taking time out of their busy schedules to recognize veterans and “to say we have not forgotten and thank you.”

On the stage of the Bowman Auditorium, there was an empty table with five place settings. The items on the table were explained, like a white tablecloth symbolizing their country’s call to arms, a single candle to represent the families that awaited their loved one’s return, a lemon and salt on bread plate that symbolizes their bitter fate and the tears of the family as they still wait for their loved one, upside down drinking glasses for those that can’t toast with them, and empty chairs for those who are not here.

All the explanations were followed a single phrase, “Remember.”

Junior ROTC members then placed dress hats on the table to symbolize the branches of the military.

The tale of how his book came to be begins at his mother, Helen’s 80th birthday party.

She pulled him aside and asked to help her with something. In private, she pulled out a wooden box and handed him a letter postmarked 1944 from Clarence Raymond Stephenson, her first husband.

They had met when she was 16 and fallen in love, but her mother didn’t allow them to marry until Helen turned 18. On Sept. 6, 1943, her 18th birthday, the daughter of Irish immigrants and the son of an Ironton carpenter married.

Helen followed her new husband as he went to different places to learn how to fly the B-17 Flying Fortress bomber.

Exactly one year later, First Lt. Stephenson was killed when his plane crashed.

“Just six weeks before Raymond died, Helen gave birth to a beautiful baby girl named Anne Marie,” O’Connor said. “It was four years after his death before she got any closure when his body was returned to her and she was able to bring him to his final resting place, right here in Ironton, a little city he grew up and loved.”

Nine years after that, Helen met a Korean War veteran and married him. She had three boys.

After reading the letter, O’Connor said he had 100 questions for his mother. The first question was why did he get to read the letter? Why not Anne Marie or one of his brothers?

“I have a story to tell you,” she said, but he had to keep it between the two of them because she didn’t want to hurt her husband’s feelings.

It turns out he was not named for her second husband’s favorite uncle as he thought, but rather her first husband.

“I wanted to name you after my Raymond,” O’Connor recalled.

The story of the dashing young brave aviator who gave up his life in World War II and the girl who grew up in New York’s Hell’s Kitchen stuck with O’Connor.

After his father died a few years later, O’Connor “abandoned” his job as a bank president/CEO to write a book about his mother’s first love.

He knew time was not on his side. Most anyone who knew Stephenson was probably in their 80s or 90s and, if they passed away, their information would be lost forever.

He tracked down the last living member of the Stephenson’s flight crew. Then he tracked down Stephenson’s sisters and one of them gave him a great gift that few knew existed, a diary that Stephenson began the day he left Ironton to join the Air Force at Patterson air base in Dayton.

He studied and when that wasn’t enough to find his voice, he decided to become acquainted with author James Bradley, who wrote “Fly Boys” and “Flags of Our Fathers.”

“Or stalk him, as some people call it,” O’Connor said. He did become acquainted with the author and during a long call with Bradley as he lamented that he couldn’t find the voice he was looking for the book, he got the advice that every writer needs to hear at some point in their career.

Two years later, he sent a copy of the book to Bradley before it was launched. A couple of weeks later, he got an email back and even wrote an endorsement of the book.