Ohio State tries for another victory at Michigan State 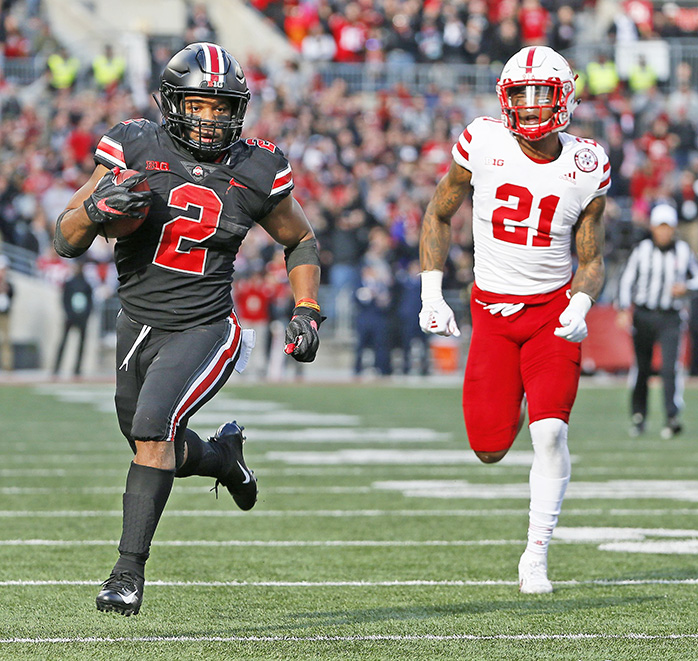 Ohio State Buckeyes running back J.K. Dobbins (2) runs ahead of Nebraska Cornhuskers defensive back Lamar Jackson (21) on his way to a 42-yard touchdown during the fourth quarter of the last week’s game in Columbus, Ohio. The Buckeyes won, 36-31, and play at Michigan State on Saturday. (Adam Cairns/Columbus Dispatch/TNS)

No. 8 Ohio State (8-1, 5-1 Big Ten, No. 10 CFP)
at No. 24 Michigan State (6-3, 4-2, No. 18 CFP), 12:05 p.m. EST (Fox)
Line: Ohio State by 3 1/2.
Series record: Ohio State leads 31-15.
WHAT’S AT STAKE?
Ohio State is still on course for a season-ending showdown with Michigan that could decide the division title, but the Buckeyes first have to deal with a Michigan State team that has given them problems in recent years. A win this weekend would improve the Spartans’ chances at a berth in the Rose Bowl.
KEY MATCHUP
Ohio State QB Dwayne Haskins vs. Michigan State’s secondary. The Spartans have the nation’s No. 1 run defense, but they’ll need to figure out how to contain Haskins, who has already surpassed 3,000 yards passing on the season and is completing 70 percent of his attempts.
PLAYERS TO WATCH
Ohio State: RBs J.K. Dobbins and Mike Weber. Dobbins and Weber have both run for over 600 yards on the season, so the Buckeyes have options when they want to test Michigan State’s run defense.
Michigan State: QBs Brian Lewerke and Rocky Lombardi. Lewerke has been the starter most of the season, including last weekend against Maryland, but he’s dealt with an injured shoulder, and Lombardi has been capable in relief. Coach Mark Dantonio stood by Lewerke as the starter this week.
FACTS & FIGURES
Michigan State beat Ohio State en route to Big Ten titles in 2013 and 2015, but the Buckeyes breezed past the Spartans 48-3 last year. … Ohio State DT Dre’Mont Jones has at least one tackle for loss in seven straight games. … Ohio State has scored 20 or more points in 21 straight games. … The Buckeyes are 24-3 in conference road games under coach Urban Meyer. Michigan State has lost five straight home games in this series. … Michigan State is 10-6 in its last 16 games against teams in the AP top 10.