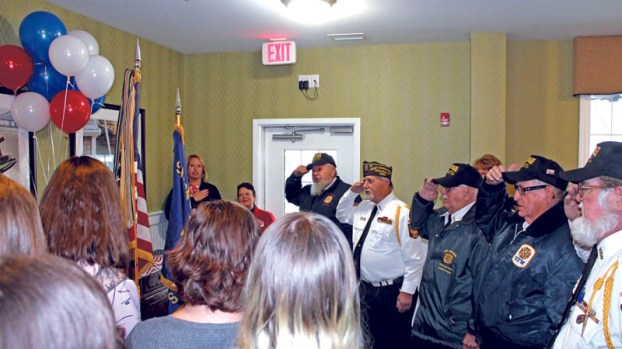 Members of Proctorville VFW Post 6878 salute during the Pledge of Allegiance following the posting of the colors Friday afternoon during a veterans ceremony at the Wyngate at RiversEdge.

ROME TOWNSHIP— The Wyngate at RiversEdge, along with Hospice of Huntington, hosted a combined Veterans Day ceremony on Friday afternoon at the senior living community.

“This is our fifth year of this event honoring our veterans,” Julie Poff, activities director at the Wyngate, said. “And our veteran community here is growing. We had eight veterans living here when we opened in 2014, and we have over 25 here now.”

The ceremony began with a welcome from Wyngate resident manager Sheila Hall, followed by Proctorville VFW Post 6878 posting the colors.

Navy veteran and Wyngate resident Paul Johnson then gave an invocation before the Pledge of Allegiance was read.

Speakers at the event included Melanie Hall, CEO of Hospice of Huntington, who thanked the Wyngate for allowing them to be a part of honoring the veterans.

Hall, who read the names of all of the veterans currently residing at Wyngate, and Juli Stephens on behalf of U.S. Rep. Bill Johnson, R-Ohio, who wasn’t able to make it due to a previous Veterans Day engagement in Marietta.

Veterans who live at the Wyngate include Roger Bays, Paul Johnson, John Collins, Jack Evans, Glen Peters, Earnest Earl, Chuck Pletka, Carl Riggs, Leo Scarberry and Gilbert Lester from the Navy; Leonard Clark, Kermit Norden, Harvey Hall, Harold Byer, Floyd Payne, Dow Prino, Rusty Johnson, Bernie McMellon and Ed Yeager from the Army; Oliver Nicholas, Lewis Adkins, Keith Rowe, Grover Jefferson and Glen Van Atta from the Air Force; Link Patterson and Ed Spotloe from the Marines; and JT Williams from the Reserves. Kermit Nordeen also served in the Air Force besides the Army, and Ed Spotloe also served in the Army besides the Marines. In addition, the Wyngate at RiversEdge staff has two veterans in Thomas Frolander, who served in the Marines, and Vienna Lemaster, who served in the Navy.

The Fairland High School choir was also on hand to sing patriotic pieces throughout the program.

VFW Post 6878 wrapped the ceremony up with the retiring of the colors, before light refreshments were served.

Next year, the Child Welfare Club of Ironton will celebrate its 100th anniversary. That’s a century of working to promote... read more