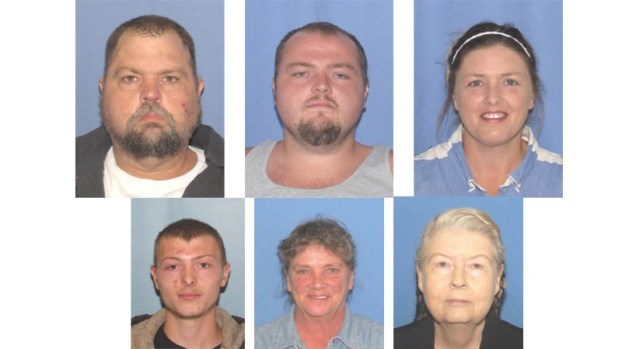 WAVERLY — After two years of investigations, six members of the Wagner family were arrested for the deaths of eight members of the Rhoden family in 2016.

At a press conference on Tuesday afternoon, Ohio Attorney General Mike DeWine announced that they would be seeking the death penalty in the case.

They lived in Peebles at the time of the murders before, moving to Alaska. Lexington, Kentucky police and the FBI arrested George Billy Wagner on Tuesday in Lexington in a horse trailer that was pulled over.

The eight counts represent each victim found dead on April 22, 2016.

“We promised the victims’ families that the day would come when this case would be solved, and today is that day,” DeWine said. “The indictments allege that these suspects developed a calculated plan to execute the victims in the middle of the night and then carefully cover their tracks. Their alleged plan was sophisticated, but not sophisticated enough for our team of investigators and prosecutors.”

Most of the victims were killed as they slept. Three young children, including a five-day-old baby, at home at the time of the murders were left physically unharmed.

They were indicted this week by members of a Pike County grand jury who have been examining evidence in the case since July. The indictments were filed less than a week after authorities confirmed the existence of a homemade firearm suppressor believed to have been built by the suspects.

“This, along with a great deal of other investigative findings, led us to these indictments and arrests today,” said DeWine. “The Wagners were friends with the Rhodens and had been for years. They knew the layouts of the Rhodens’ homes, and they knew the victims’ routines. It is our belief that the suspects used this knowledge to meticulously plan these horrendous, cold-blooded murders. ”

The Wagners are also facing a series of additional charges including conspiracy, engaging in a pattern of corrupt activity, tampering with evidence, unlawful possession of a dangerous ordinance, forgery, unauthorized use of property, interception of wire, oral, or electronic communications, obstructing justice, and aggravated burglary.

The indictments allege that the suspects purchased ammunition, a magazine clip, brass catcher(s), and a bug detector in preparation for the crimes. They also allegedly obtained and shared information about the physical layouts of the victims’ properties, their habits and routines, sleeping locations, and countersurveillance devices present on their properties, including pets.

The indictments accuse the Wagners of tampering with phones, cameras, a silencer, shell casings and parts of a home security system.

Jake Wagner is also charged with unlawful sexual conduct with a minor for having sexual contact with Hanna May Rhoden when she was 15 years old and he was 20 years old. Jake Wagner is the father of Hanna May Rhoden’s older daughter, who was staying with the Wagners on the night the homicides took place. All four suspects are accused of forging custody documents.

“I made a promise to the victims’ families and to the people of Pike County that we would solve this, no matter how long it took,” said Pike County Sheriff Charles Reader. “I want to thank Ohio Attorney General Mike DeWine and his team for their continued commitment to this case.  It’s been tough to be patient at times, but we kept our eye on the goal – justice for the victims.”

“We have never stopped working to find the people responsible for these savage crimes, and our sympathies continue to be with the victims’ families,” said Prosecutor Junk. “There is still a lot of hard work ahead of us, but we will continue to fight to hold these alleged killers accountable.”

Both Rita Newcomb, 65, of South Webster, and Fredericka Wagner, 76, of Lucasville, are facing felony charges of obstructing justice and perjury for allegedly misleading investigators over the course of the investigation. Newcomb is also charged with forgery.

Throughout the investigation, authorities estimate that they conducted tens of thousands of hours of investigative work; followed more than 1,100 tips from the public; conducted 550 interviews; tested more than 700 items of evidence; and served more than 200 subpoenas, search warrants, and court orders.

WAVERLY — At a press conference on Tuesday afternoon, Ohio Attorney General Mike DeWine announced that they will be seeking... read more