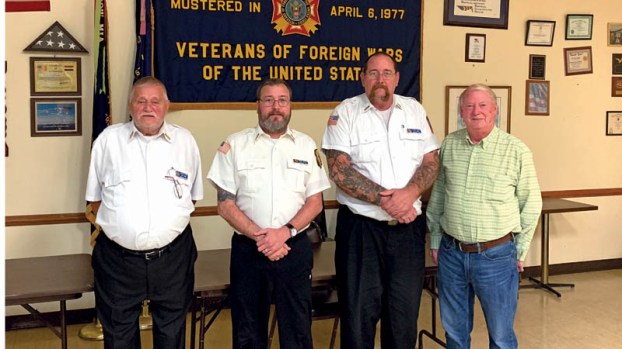 Members of the VFW Post 8850 in Ironton come from a variety of backgrounds and have diverse stories of service. Pictured from left to right are Bennie Blankenship, David Pemberton, Dale Dickerson and Walt Butler.

When you first walk in, it feels like you are just at a normal pub or restaurant, as you see televisions scattered around to watch and beer and liquor for sale.

It has bar stools and tables and a friendly staff, but the real key to the VFW is the people. The clientele that make up the heart of this establishment are mostly veterans — veterans who have given of themselves so you can continue to be free and to walk into any establishment that you want.

Veterans like Bennie Blankenship. He is 82 years old, grew up in Ironton and still is an avid golfer. Bennie has a quick smile for you and, after a minute or two of talking with him, you can easily see why he is the Honor Guard team member that is chosen to present the flag to the families at area veteran funerals.

He is sociable and funny as he tells me to “let everyone know to stop down at the VFW and hear the old veterans tell some lies and drink some beers.”

He also has a serious side, as he wants people also to know, “that it’s a bunch of bullcrap not standing up for the flag.”

“If the NFL players had ever served, they would all feel different,” he said.

That bothers Bennie, not standing for our flag. It bothers others too, as many that hear Benny are nodding in approval as we sit surrounded by the red, white and blue on all of the walls surrounding us.

Benny served in the Army as a staff sergeant in the 12th Infantry from 1954-1957. He was stationed in both Korea and Germany during his years, so you can easily understand his views. After he served, Bennie became a machinist and worked at the Enright Building for 28 years before working as a Tri-State Industry supervisor for another 11 years.

The VFW commander is Dale Dickerson, a tall, tattooed man who served in the Navy from 1979-1983 and was stationed in Beirut, Lebanon.

Dickerson stated that the unit that relieved his during the 1982 Lebanon War was the United States multi-national peacekeeping force that had their barracks bombed, killing 241 American servicemen, 58 French servicemen and six civilians.

Dickerson, a welder during his time in the Navy, said he served with “good people” and had “good times” and said “he wouldn’t trade that time for the world.”

Walt Butler, who is in charge of the canteen (that is what the VFW calls its bar/restaurant area) and also the quartermaster served in the Air Force from 1963-1967 as part of the 4th commando squadron at the Nha Trang Air Base in Nha Trang, Vietnam.

Walt said it was an honor to be a part of a tradition in his family that served our country. Walt and the others stated that this area of the country (The Tri-State area of Ohio, Kentucky and West Virginia) has always been known as having the most servicemen and women serving our country (per capita) during its time of need.

“Family tradition plays an important part in that dedication and unselfishness” David Pemberton, who served in the Army from 1987-1991 during operation Desert Storm, said.

Pemberton told us that his grandfather, William Pemberton, served in WWI, his uncle, Charles Pemberton, served during WWII and was killed and is buried in Luxembourg. His father, brother and several other uncles and cousins also have served over the last 50 years.

Pemberton, who was stationed in Germany with the Second Armed Division, which was the only combat unit in Germany at that time.

“It was pretty tense, because this was right at the time that the Berlin Wall fell,” he said. “The barracks that we stayed in ended up being used for East German housing when the people came over to West Germany.”

Pemberton also remembered walking through the same parade field and seeing the tower that Adolph Hitler stood at during a parade of his troops.

“If that doesn’t give you chills, something is wrong with you,” he said.

Pemberton used his GI Bill to attend and graduate from Marshall University in 1997. He worked in radio and TV production at Channel 13 for 16 years. Since 2012, he has worked with veterans in a few areas of rehabilitation from mental or physical disabilities.

He is currently working at the Hershel “Woody” Williams VA Center in Huntington on suicide prevention. He stated that “more veterans need to take advantage of the VA hospital.”

Pemberton said that, after the military, many veterans struggle with civilian life.

“They have a set structure, a routine, a way of life in the military,” he said.

Once they come home, that structure is often gone.

“No veteran should ever need the basics,” Pemberton said. “Socks, toothpaste and underwear should be given to anyone that has protected our country.”

When listening to Bennie, David, Dale and Walt talk about serving in the military, Bennie said, you know “everybody was brothers.”

David jumped in and stated, “Everybody was green. There was no black, white, or different religious barriers ever. We were all on the same team and all doing our duty together.”

Family is exactly the way they all do things at the VFW. These four brothers are all on the Honor Guard together. The Honor Guard is a group of 14-15 different VFW members who attend roughly 100 funerals a year for the area veterans who have passed on.

“It’s important to the family and to the veterans,” Bennie said.

The captain of the honor guard, Dusty Smith, said “the honor guard is the main highlight of the VFW as everyone who serves with him are very proud of the work they do for others.”

This group leads the annual Memorial Day parade, attend many school events and work on a yearly golf tournament along with attending the fallen veteran and families area funerals.

After meeting these four amazing men, I will be joining the VFW as an auxiliary member soon. You can join the auxiliary of the VFW by just joining under the name of any veteran in your family. The auxiliary is men and women that were an important part of a veteran’s life and the VFW is always happy to sign up new members as everyone who stops into the canteen is family.

WAVERLY — Officials have announced that four people have been arrested in connection with the murders of eight family members... read more