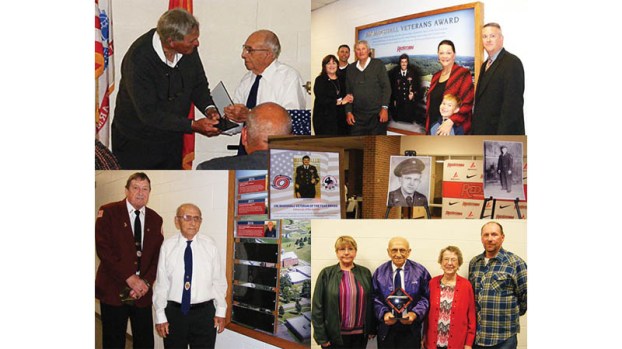 Danny Wagner, of Hanging Rock, was presented with the Jim Marshall Award by The University of Rio Grande and Rio Grande Community College at its “Honor Our Veterans” ceremony on Saturday, Oct. 27.

Korean War Veteran Sgt. 1st Class Danny Wagner, of Hanging Rock, was presented with the Jim Marshall Award by The University of Rio Grande and Rio Grande Community College at its “Honor Our Veterans” ceremony on Saturday, Oct. 27.

Wagner enlisted in the Army in August 1948, serving in multiple infantries and companies during the Korean War, and also serving as a Squad Leader during engagements. He received three Purple Hearts and numerous awards for service to his country. After four years of meritorious service, Wagner was honorably discharged from the Army in May 1952. Wagner retired from Sunoco Chemical Company and is a member of the Ironton VFW Post 8850.

Wagner said he appreciates being recognized for the award, as well as the work Rio put into honoring all veterans at the event.

“This award means a lot to me,” he said. “I’ve been out of the service for 60 years, and I’ve never been awarded anything like this before. I appreciate what Rio’s done for veterans and that they continue to honor those who have served, including those who didn’t make it back. I think this award is a good way to recognize veterans, and I appreciate Jim Marshall and his service to our country. There was nobody like him.”

Frank Collins, of Ironton VFW Post 8850, who nominated Wagner for the award, said he believes Wagner deserves the award for his spirit, dedication and endurance in serving his country.

“I went to school and played basketball with Jim Marshall, and there’s no one better to name this award after,” Collins said. “He was a hero for his country and a wonderful person. I nominated Danny for this award because he has the same spirit and dedication to his community and country that Jim always had. I’m excited that Danny was chosen because he went through so much during the war, earning numerous awards and three Purple Hearts and is truly deserving of this recognition.”

ROME TOWNSHIP — At the height of World War II, Paul Johnson said he lied about his age so that... read more