Meyer may have plans for Martell 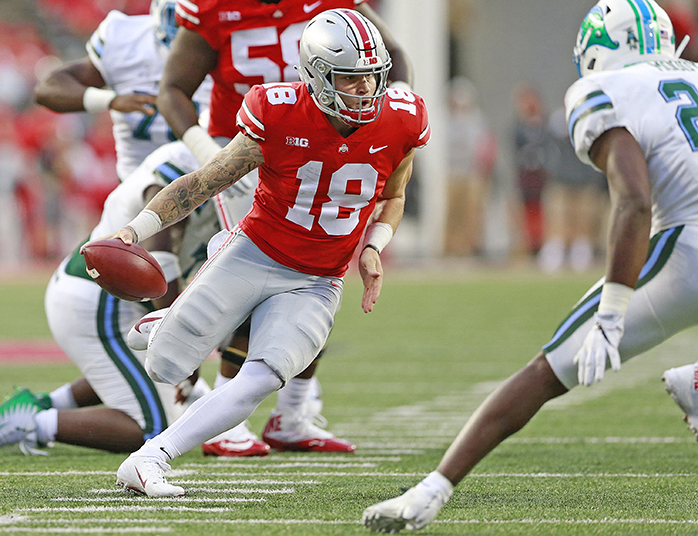 Ohio State quarterback Tate Martell (18) carries the ball in the against Tulane at Ohio Stadium in Columbus. (Brooke LaValley/Columbus Dispatch/TNS)

COLUMBUS – Those two brief appearances by back-up quarterback Tate Martell in Ohio State’s 26-6 win over Michigan State last Saturday probably won’t be the last time the Buckeyes bring in their No. 2 QB in running situations near the goal line.
In fact, Martell might be on the field more in the future, Ohio State coach Urban Meyer said on Monday at his weekly press conference.
Meyer said he sees Martell’s role expanding. “First of all, he’s a good player. I give him a five on the competitor scale. He’s an elite competitor. He has worked his you-know-what off.”
The lack of a running component in starting quarterback Dwayne Haskins’ game has opened the door for Martell.
Haskins has thrown for 3,280 yards but has netted only 34 yards on 41 rushing plays in his first year as OSU’s starting quarterback.
Martell rushed for five yards to put the ball on the 1-yard line two plays before Ohio State’s first touchdown against Michigan State. He also was in for three hand offs to Mike Weber in the fourth quarter before a fumble ended an OSU drive that had gotten to Michigan State’s 7-yard line.
When Haskins was asked about coming out of the game on Saturday, he said, “It’s a little hard. But you know it’s for the betterment of the offense. It’s just a certain package we have when the coaches feel like we need to run. I can’t complain about that but it’s a little frustrating.”
In Ohio State’s last two games, Haskins has completed 59 percent of his passes and averaged 239 yards a game passing. In OSU’s first eight games he completed 71 percent of his throws and averaged 350 yards a game. He has a total of three touchdown passes in the last two games and had 30 in the first eight games.
“I think the key word is development,” Meyer said. “This will be his eleventh game. Also, there’s the quality of defense we’re facing. What we saw Saturday was a legit quality defense. I think his development has been very good to this point.
“We’d like to see him catch fire again. It’s not just him. It’s the (defensive) pressure on him. It’s the receivers. If Johnnie (Dixon) catches that ball coming across the middle, which he always does, that’s a 35-yard gain. We had another one (dropped pass). I’m pleased with him,” he said.
Some other thoughts from Meyer on Monday:
WEBER’S BEST GAME?: Meyer said tailback Mike Weber played “probably his best game” in the win over Michigan State when he ran for 104 yards and a touchdown even though he has had more yards in other games.
Meyer said he based that opinion on the number of times Weber gained yards after contact and on the strength of Michigan State’s defense.
MAYBE A GRANDCHILD: Meyer said he told Terry McLaurin he likes the way he plays on special teams so much he’d like to do something to honor him.
“It’s just ridiculous what he does. They ought to put a statue of him somewhere. I told Terry if I had another child I’d name him Terry but I don’t imagine that’s going to happen,” he said.
JORDAN’S SNAPS: Michael Jordan, who was moved to center from guard this season, has been erratic with shotgun snaps at times, including one against Michigan State, that led to a turnover when the Buckeyes were threatening to score a touchdown.
“It is a little bit of a transition for him,” Meyer said. “He was out there yesterday working on how he holds the ball. We’re studying it and working extremely hard on it.”
WHITE STAYS IN LINEUP: Safety Brendon White got his first start at Michigan State and is expected to get a second start at Maryland on Saturday. He had five tackles and a pass break-up against MSU after having 13 tackles against Nebraska.
“I just see he’s playing well and he’s tackling. He has done a nice job of that,” Meyer said. “He answered the bell. Brendon has had two very good games.”

CINCINNATI (AP) — Hue Jackson needed only a few weeks to land another job in the place where he’s always... read more