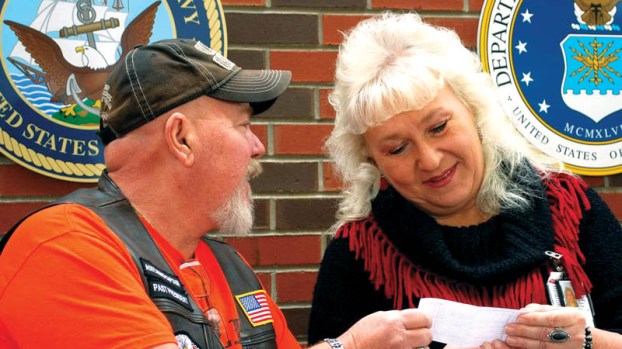 The American Legion Riders Post 325, Flatwoods, Kentucky recently donated $5,000 to the Hershel “Woody” Williams VA Medical Center in Huntington. The money was given to the Voluntary Services Department and is to go towards helping homeless veterans.

Shayne Barnes, the assistant road captain with Riders, said this is the group’s fifth year, and his second year, of making a donation like this. Barnes is member of the Legion, under of the Sons of the American Legion clause. His father fought in World War II and his son-in-law fought in both Iraq and Afghanistan.

“That’s the reason why I have so much respect for the military,” Barnes said. “When I found out Post 325 was doing homeless vet rides, I joined.”

The riders held their ride in September.

Barnes, whose wife owns and runs Peddler’s Restaurant, said he and others simply asked for donations for their homeless vets ride and that businesses were quite happy to donate for a good cause.

“I wasn’t afraid to go out and ask for donations. If they tell you no, you say ‘Thank you anyway’ and go on your way,” he said. “But most of the people we talked to this year, we didn’t hardly get a no. This town, it just has so much respect for the military. Maybe it’s from where we have the Memorial Day parade, but very few said no.”

Barnes said that he doesn’t see why any veteran is homeless, although he understands in some cases, it may be their choice.

Barnes said that the why doesn’t matter, they just want any homeless veteran to get the essentials.

“The VA’s Homeless Veterans Program makes sure they get things like toothbrushes, toothpaste, socks, T-shirts, anything they might need,” he said. “And if they want help to get set back up into an apartment, they can help with that. That money helps them get started back up.”