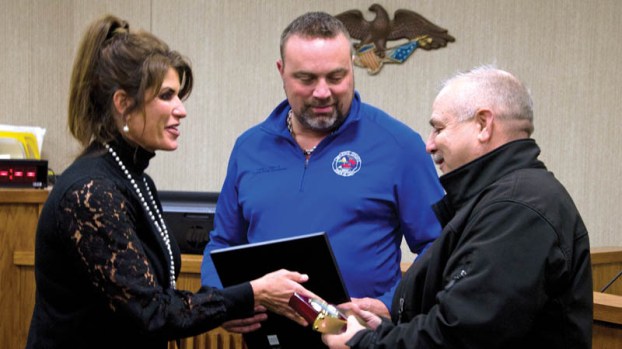 Steps down after serving as humane officer for two years

Members of the Lawrence County Commission and the County Humane Society paid tribute on Friday to a man who has served the area for two years, working for the welfare of animals.

Randy Thompson resigned this year from the position of county humane officer due to health reasons and Commissioner DeAnna Holliday said his successor will “have some big shoes to fill.”

She pointed out that Thompson has “worn many hats” in his jobs throughout the county, which have included work for Chesapeake police, where he serves as interim chief, the Proctorville police and the Lawrence County Department of Job and Family Services.

Holliday said one of the most important things Thompson brought to his work as humane officer was his efforts at education on the well-being and proper diets of animals.

“It’s not always that the person intends to do wrong,” she said. “A lot of the times, they  don’t know. He made a difference, not only in the animals’ lives, but also the families’’ as well.”

Commissioner Freddie Hayes Jr. said he has worked with Thompson in his many jobs and that he will be missed as humane officer.

“Everything he does, he does 100 percent,” Hayes said. “It will be hard to replace Randy.  He’s a great guy and we appreciate what he’s done.”

Thompson was presented with a plaque and mantel clock in appreciation for his two years of service, which began in January 2016.

“It’s been a pleasure to serve you,” Thompson said, adding that he learned a lot about animals on the job. “This is a job you’ve really got to love and want to do each day. We did a lot in two years.

Thompson also added that he has three kittens, one with “wobbly kitten syndrome,” that he is still trying to find homes for.

He said, if his health improves, he would like to return to the work some day, if possible.

VFW Post 8850 puts on event every Veterans Day Every year, at the eleventh hour of the eleventh day of... read more