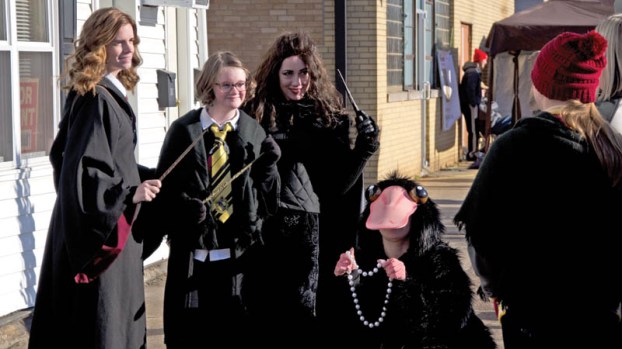 Some students of the Hogwarts School of Witchcraft and Wizardry gathered in Ironton for the first Wizardfest this weekend. The festival is based on the Harry Potter books and drew fans from all over the area.

From the size of the crowd on Saturday, it looks like Ironton’s first Wizardfest was a success.

Themed around the 20th anniversary of the first U.S. release of the Harry Potter novels by J.K. Rowling, the festival brought fans of the books of all ages to downtown, where they celebrated their love of the characters.

In the Ro-Na Theater, decorated as the Great Hall, participants took part in wand duels and enjoyed an animal show by Gary Bussa, of Kentucky, who brought several reptiles and other animals with him, such as a boa constrictor and a tarantula.

Outside, more animals could be found from the BARKer Farm Petting Zoo, as well as vendors selling merchandise.

Fans wore costumes and posed for photo ops along the way, by things such as the replica of Potter’s car, a 1962 Ford Anglia, set up by Let’s Get Geeky of Lexington, Kentucky.

Organized by a private partnership and non-profits, this was the first year for the festival.