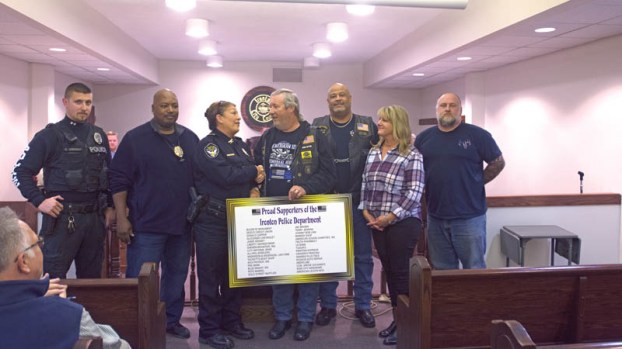 Money will go towards bulletproof vests

At last Thursday’s Ironton City Council meeting, a group of bikers in their leather vests stood up to talk, not to complain about something, but rather to make a hefty donation to help out the officers of the Ironton Police Department.

Frank Murphy, the road captain for the American Legion Post 433 Riders and Post president, gave them a $7,000 check.

“We did a fundraiser to raise money for the police department,” Murphy told council. “Officer Anthony (Forest) told us that their vests had expired. We didn’t think it was right for our officers to be out here with expired bulletproof vests. We raised $7,000 to help them buy as many vests as they can. We were hoping for more but this is what we ended up with.”

Members of the council and the audience applauded the Riders.

“We thank you,” IPD Chief Pam Wagner said to the Legion members.

Wagner said they are working on getting a grant from the Ohio Attorney General’s Office to buy bulletproof vests and that the donation would be used for matching money that the grant requires.

“We are hoping to get everyone new vests,” she said, adding that her vest was about 13 years old and vests expire after about two years. She said the vests are about $2,800 each.

Murphy said the money was raised during their annual ride the Legion does in memory of John Ackerman, who was a Legion Rider. Every year, they pick a different group to support and this year, they chose the IPD because of the number of police officers who are shot every year in the line of duty.

“We didn’t feel that was right,” Murphy said. “A lot of us are vets and we protect our country.

And while we are gone, the first responders are here protecting our families.”

He said after talking with IPD Sgt. Forest about the risks police officers faced, especially when dealing with the drug problem, they just didn’t feel it was right they might get hurt because of an expired vest. “So protecting our officers was very much needed.”

The money came from a number of area business and groups who were happy to donate since they were standing up for police officers.

The subjects of Thursday’s Ironton City Council meeting were septic hauling and budgets. The only ordinance on the agenda was... read more