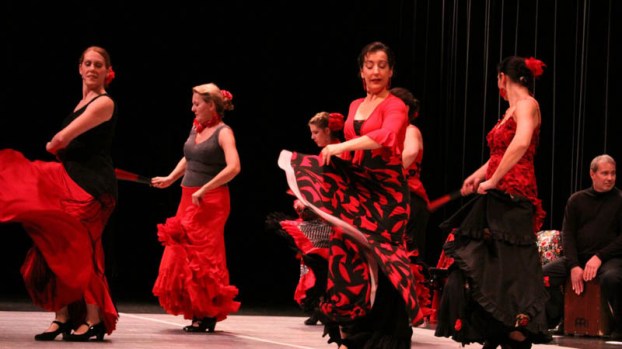 Event part of Ironton Council for the Arts

The Ironton Council for the Arts presents “Flamenca Louisville,” a show which showcases the art of Spanish dance and music, at 7:30 p.m. Saturday in the Ironton High School Auditorium.

The Flamenca Louisville company was founded nearly 10 years ago with dancers from the Ballet Espanyol, which had just dissolved at the time. Today, its founder and co-director Diana Dinicola, along with co-director Paula Collins, head the company.

Flamenco grew organically out of folk dances and music in the Andalusian region of Spain, and while it has never reached the popularity of ballet and other dance forms have in America, the style is represented in pockets of music and dance in cities and towns all over the country.

While its exact history is not known, it is generally accepted that Romany people in Spain first practiced Flamenco.

Flamenco Louisville often performs around Kentucky and Indiana, and they normally begin with a short vocabulary lesson. The performance, which is called tablao, features a guitar solo or two, some vocal performances and six or seven dances, which may be accompanied by guitar, percussion, vocals, or all three.

The group, consisting of the dancers, musicians and vocalists, is called the cuadro, and each member has a special name. The toque is the guitar, the cante is the song and the baile is the dance.

Flamenco Louisville also gives a short lesson on audience participation so students can catch the spirit of the performance and contribute their own jaloes, or cheers of encouragement. If you attend the tablao this weekend, you may hear a number of jaloes, but some classics are “olé,” “vamo” (go!), “eso es” (that’s it), and, if there is a particularly fierce piece of footwork, you may hear “agua” (water), which playfully suggests that the feet of the dancer are on fire.

Tickets for the show are $10, and are available at the door the day of the show. Ohio University Southern students are admitted free with a valid student ID.

Several items were passed at the meeting of Lawrence County Commission on Tuesday. • Proclaimed Friday, Nov. 9, 2018, as... read more