Marshall knows Cedarville is the right place for her 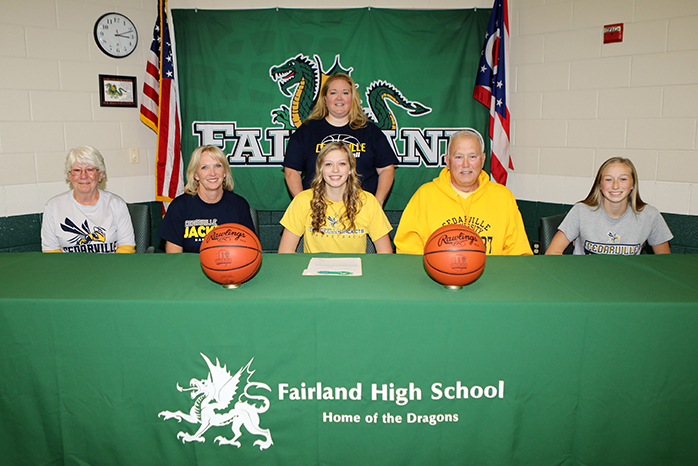 PROCTORVILLE — Allie Marshall knows just what she needs to do on the basketball court. She also knows just what she wants to do with her future.
After entertaining offers from a couple of West Virginia colleges that included Glenville State, one from Rhode Island and another four from Ohio, Marshall selected NCAA Division II Cedarville University.
Marshall said the decision wasn’t difficult.
“They have exactly what I want as my major and all the classes I need to take so I can be done in four years which is great,’ said Marshall who plans to major in Early Childhood Education.
“And then, how they just apply God to everything just shows how close they are as a family, about the whole community and how close it is together with each other.”
Last season, Marshall average 10.9 points, 5.9 rebounds and 3.7 assists per game as she was named second team all-district and honorable mention All-Ohio.
Fairland head coach Jon Buchanan said Marshall is a good player and a good student, but he said her work ethic has put her in a position to play at the next level and she will be reunited with former Fairland point guard Emily Chapman who is in her freshman season at Cedarville.
“Allie earned (the scholarship). She did a good job this summer,” said Buchanan. “I think she’s a good fit. I think she’s a different player than Emily.
“Allie’s big thing is she can defend at all levels. Allie can defend your point guard and Allie can defend you five man. I think that’s what make her so valuable at the collegiate level and that’s going to give her minutes early just form the standpoint she can step on the floor and guard five positions.”
At Fairland, Marshall has played forward and some center. She seems to know just what her role will be at Cedarville as well.
“I’m kind as tall as everybody else. I’m 5-10 and I can jump pretty high, so they’ll want me to rebound,” said Marshall who has excellent speed. “I think they’ll have me try to guard everywhere.”
She will get an opportunity to play with the team later in the season when she makes another visit. Marshall knows she will be starting all over in her freshman season, but that’s a challenge she anxiously awaits.
“I think it’ll be a good feeling knowing that I’ll have to work at it again to get back up to the top along with the other seniors who have worked with me. I’ll get to work with two other freshmen so we can work to the top,” said Marshall.
The Yellow Jackets have five seniors — two are fifth-year students — and there will also be a redshirt freshman.
Having played since kindergarten, Marshall said playing college basketball has been a goal for many years.
“This is always something I’ve wanted to do,” said Marshall. “There were camps when we were little and we would go to them with all the older girls. (Current teammate) Kelsey Riley was one of them (who went to the camp).”
Previous Fairland players were the camp and taught the younger girls said Marshall which left an impression.
“Me and my sister (Emma) ended up liking basketball and so we just stuck to it.”
Even at a young age, Allie Marshall knew what to do and it turns out she still knows what to do.
Allie is the daughter of Renee and Eddie Marshall.