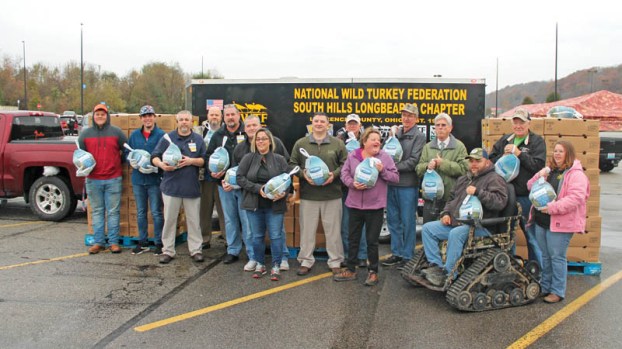 Members of the South Hills Longbeards Chapter of the National Wild Turkey Federation and other volunteers at the South Point Walmart parking lot on Monday before 375 turkeys were passed out to several local churches and food pantries.

SOUTH POINT — For the second straight year, the South Hills Longbeards Chapter of the National Wild Turkey Federation (NWTF) gave out turkeys to local churches and food pantries to be distributed to families in need for the holidays. Only, this year, the chapter more than doubled the amount of turkeys it gave away, handing out 375 this year compared to around just 150 in 2017.

“We had our gun bash this year to raise money for this, which is why we were able to give away more turkeys this year,” chapter president Larry Pernestti said. “We raised about $12,000 and spent around $8,000 on the guns, which left us with about $4,000 that we made, which we spent on the turkeys to give away.”

Members of the chapter and volunteers gathered in the parking lot of South Point Walmart Monday afternoon, where people from various churches and food pantries came and picked the turkeys up.

“We have two corporate sponsors that help us out with this project in South Point Walmart and and City National Bank,” Pernestti said. “And this is just another way for us to be able to give back to the community.”

The South Hills Longbeards Chapter of the NWTF is a 501c3 nonprofit that’s been around since 1995, and is headquartered in Kitts Hill.