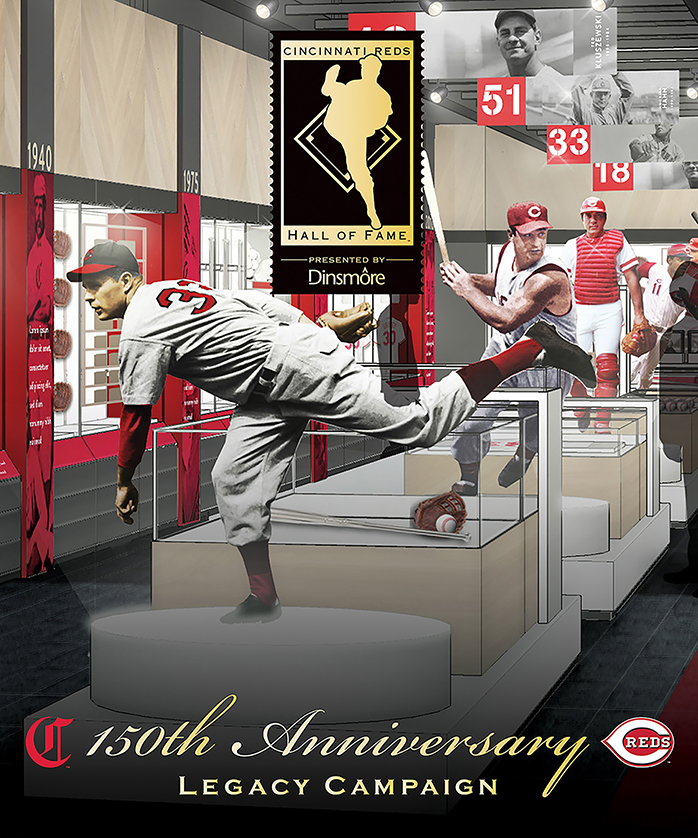 CINCINNATI — The Cincinnati Reds announce plans for the 2019 season-long celebration of the 150 Year Anniversary of Professional Baseball which began in Cincinnati with the formation of the 1869 Cincinnati Red Stockings.
Background on 1869 Red Stockings
The 1869 Red Stockings were the first openly all-salaried professional team in baseball history, transforming baseball from a social-club pastime to a professional game.
In their inaugural season of 1869, the Red Stockings played opponents from across the country going undefeated with 57 wins, 0 losses.
The Red Stockings success resulted in other cities establishing their own all-professional teams which became the basis of league play that still exists today.
“We are extremely proud to be the birthplace of professional baseball,” said Reds Chief Executive Officer Bob Castellini.
“Fans and communities throughout Reds Country share this prestigious distinction with us. It is their loyalty and support that has allowed Reds baseball to thrive. This will be a 150th anniversary celebration of the franchise and the generations of fans who have been its champions.”
“The year of 1869 is an important milestone for professional baseball and a symbol of Cincinnati’s unique role in professional baseball history,” said Major League Baseball Commissioner Robert D. Manfred, Jr..
“Major League Baseball looks forward to celebrating the Reds’ origins and Cincinnati’s significant place in the evolution of our great game.”
Commemorative 150th Anniversary Logo
A new logo honoring the 150th anniversary will be featured throughout Reds programming, activities and giveaways all season long.
2019 Uniforms and Patches
Commemorative patches will be worn on all jerseys and caps throughout the season.
Home jerseys and caps will feature the primary 150 logo, and road jersey and cap will feature the secondary 150 logo.
Also, during Spring Training players will wear new jerseys featuring the old-style “C” logo that matches the Spring Training caps and is reminiscent of the 1869 Red Stockings.
2019 Reds to Wear 15 Throwback Uniforms from Reds History
Current players and coaches will wear 15 different Reds uniforms from franchise history beginning May 4, 2019, which is the date of the first Red Stockings game in 1869 and continuing at select home games through the end of the season.
These special uniforms are the result of a collaboration between the Reds, Major League Baseball, Majestic and New Era.
Fans can find more information on all the throwback uniforms at: https://www.mlb.com/reds/one-fifty/throwback-uniforms
Uniform Bench Campaign featuring Mr. Redlegs
150th anniversary benches will be displayed at over 20 locations across Greater Cincinnati and Northern Kentucky. They are designed to mimic dugout benches and will feature the Mr. Redlegs mascot wearing each of the 15 different throwback uniforms the players will wear during the 2019 season.
“Reds Rockin’ 150 Open House” with Current & Former Reds players – July 5, 2019
This summer’s biggest birthday bash will be at Great American Ball Park
All fans are invited to the Reds Rockin’ 150 “Open House” on July 5. The doors will be open for fans to explore the ballpark and immerse themselves in the history of Reds baseball.
The Reds Rockin’ 150 will feature appearances by current and former players, food, entertainment, interactive games and more, all culminating with a spectacular Rozzi’s fireworks show.
Legacy Projects – making a sustained impact on our community
• The Cincinnati Reds Hall of Fame & Museum presented by Dinsmore is undergoing a comprehensive modification to upgrade and enhance the overall visitor experience.
The renovations will impact all 16,000 square feet and will incorporate more technology and historical artifacts into a new design that will better tell the rich and storied history of the Reds. The museum will reopen in March with a ribbon-cutting ceremony prior to 2019 Reds Opening Day.
• The 1869 Pavilion will be a new addition to the southwest corner of the ballpark. The dedication ceremony will take place on May 4, unveiling a tribute to the original Red Stockings team.
The pavilion is being designed by local sculptor Tom Tsuchiya and will be located along Joe Nuxhall Way behind the Reds Hall of Fame & Museum.
• The Reds Community Fund will take the lead on two special field renovation projects in 2019. Ross Park in St. Bernard will receive a new synthetic infield, upgrades to the outfield, plus a renovation of the bleachers, concessions stand and surrounding park.
The second project will take place in Northern Kentucky at the Bellevue Vets complex where the high school field will receive a new synthetic infield and an expanded outfield, along with upgrades to the two adjacent fields.
Both renovated ballfields will be designed as an homage the original “Palace of the Fans” baseball park where the Reds played from 1902 through 1911. MSA Architects will oversee the design and construction of these unique elements.
FOR A LIMITED TIME: 150th Exclusive Merchandise available at the Reds Team Shop
New merchandise featuring the 150th logo available at the Reds Team Shop at Great American Ball Park for a limited time beginning November 6. Items will include jerseys, caps, polos and outerwear plus pins and patches.
Promotions
Many of the 2019 promotions and giveaways at the ballpark will carry a 150th anniversary theme, including a special bobblehead series.
Full details on all the 150th anniversary celebrations for 2019 can be found at reds.com/150.