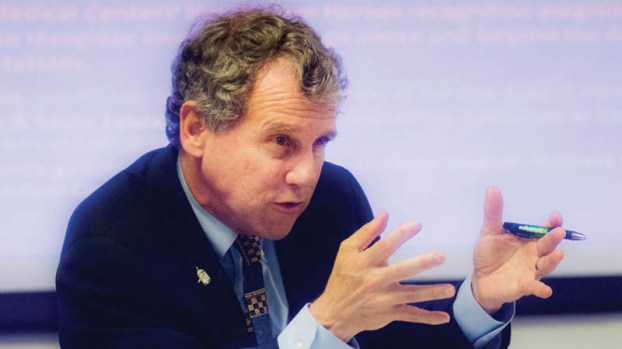 Senator has been cited as capable of selling Democratic message

U.S. Sen. Sherrod Brown, D-Ohio, has said he is considering a run for his party’s nomination in the 2020 presidential race.

Brown, 66, who was re-elected to a third term in the Senate last week, defeating Republican U.S. Rep. Jim Renacci, was interviewed by the Columbus Dispatch on Monday and said the talk of those urging him to run had reached “sort of a crescendo.”

In the days following the general election, the Washington Post listed Brown as one of the top 15 possible candidates for the Democratic nomination, while the Huffington Post and  The Week cited him as one of his party’s best bets for the race.

“Want To Beat Trump In 2020? Look At Sherrod Brown’s Big Win In Ohio,” Huffington Post asked in its headline for a story by Andrew Romano.

The piece referred to Brown as “America’s most underrated politician” and said his name should be considered with the more talked-about ones in the Democratic party, such as former vice president Joe Biden and U.S. Sens. Elizabeth Warren, Kamala Harris and Bernie Sanders.

Brown was the sole Democrat elected to statewide office on Election Day in Ohio, with Republicans taking the offices of governor, auditor, treasurer, attorney general and secretary of state.

“In fact, Brown received 280,000 more votes than his party’s gubernatorial candidate, Richard Cordray, and 100,000 more than Cordray’s victorious Republican rival, Mike DeWine,” Romano wrote. “Brown actually won by a larger margin Tuesday than in 2012, when Barack Obama was on the ballot to boost Democratic turnout. And the gap between his victory this year and Trump’s in 2016 — a swing of 14.5 percentage points — was wider than all but Jon Tester’s in Montana and Joe Manchin’s in West Virginia.”

Speaking to the Dispatch, Brown said the talk has been “pretty overwhelming.”

“My first mission is to encourage people to start talking about (American workers) more, reaching out to people in the industrial Midwest,” the senator said. “We’ll see later on about the presidential race. But we are thinking about it for the first time seriously.”

It was the first time Brown has acknowledged such a consideration publicly.

Brown’s wife, syndicated columnist Connie Schultz, linked to the Dispatch story on her social media feed with the message “We’re thinking about it.”

Brown was considered one of those on the shortlist for vice president for Hillary Clinton in 2016, though the nod eventually went to U.S. Sen. Tim Kaine, D-Virginia.

Those pitching Brown for a presidential bid have cited his coming from a key Midwestern swing state which Trump won in 2016, as well as his populist focus on working class issues, something he spoke about on MSNBC’s “Morning Joe” on Monday.

He said a message of working class economics is the path his party should take in governing, after it takes control of the U.S. House of Representatives on Monday.

“I’d go back to the winning campaigns around the country that helped us take the House,” Brown said. “I’d go look at my campaign, in many ways, as a blueprint, not just to govern — I don’t mean false modesty here — but to prepare for 2020, a blueprint where the focus is on workers, regardless of what kind of work you do, — whether you swipe a badge or are on a salary, putting workers first, looking at what we do as a nation for those who work and to get the cost of prescription drugs down and do infrastructure.”

Grandmothers to plead not guilty to obstructing justice, perjury COLUMBUS (AP) — A child at the center of a custody... read more