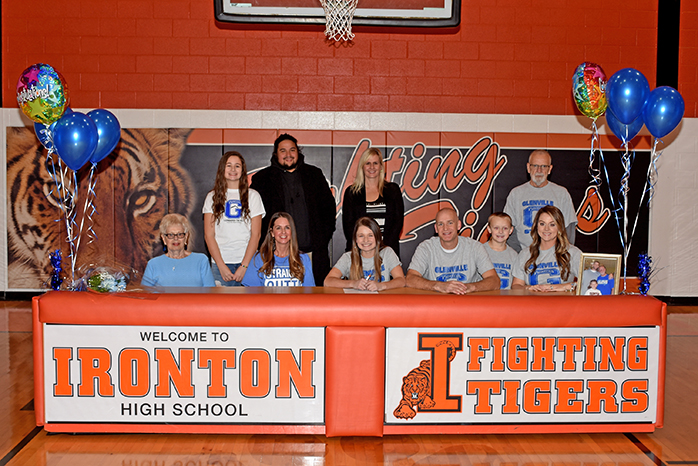 There’s a Bugs Bunny cartoon where the P.A. announcer says, “There has been a change in the Teetotalers’ lineup. Now catching, Bugs Bunny; left field Bugs Bunny” and so on for each position.
Meet Bugs Bunny’s real-life persona, namely Ironton Lady Fighting Tigers’ softball standout Haylee Stevens.
“Haylee is a team player,” said Ironton coach Missy Fields. “This will be her fourth year on varsity. She played some second base, some shortstop. A couple of years I needed a good outfielder and she anchored left field but she played center a lot. She’s very versatile. She can play just about anywhere. I’ve never seen her pitch, but I’m sure if she tried she could.
“She is a leader. She doesn’t complain. She’s a worker. You want a lot of Haylees on your team.”
Stevens will be on the Lady Tigers’ team this spring, but next fall she will play for the Glenville State University Pioneers after signing a letter-of-intent on Thursday.
She said her versatility was evident during her first workout for the coaching staff.
“Whenever I went, they had me work in the outfield because that’s where I played for Ironton. But then I got to second base which is where I played in travel ball season and I could feel she was liking me there. I felt if I could get to play there it would be an honor. I like middle infield. That’s my favorite,” said Stevens.
The biggest reason Stevens gravitated to the Pioneers was because of assistant coach Amanda Stoddard.
“I emailed a lot of colleges, but I saw the Glenville assistant coach at a lot of my travel ball tournaments and she stayed in contact with me. She was the only one who was really interested in my,” said Stevens.
“I thought, if this is the only college that’s really interested in me and wants me to come play with them, why not take a visit there. As soon as me and dad (Drew Stevens) I got the feeling that I just wanted to be there. You get that feeling when you walk onto certain fields it’s going to be a good game. When I saw the field, there was something there. When I went back for my second visit, that’s when I made my decision.”
A good athlete, Stevens also plays basketball but said softball has always been her first love.
“I actually went through a rough time last year, and every time I stepped on the softball field it was like nothing even mattered. It was just me and the game and that’s it. I get that feeling every time I get on the field,” said Stevens.
Stevens hits for an average and steals bases, but she has shown some power with an occasional home run.
“I’ve always been leadoff my whole life. I’m not saying I’m not that strong, but home runs come whenever they come. I don’t try to (hit home runs). Obviously, if I try to it’s not going to happen every time,” said Stevens.
“When I get up it’s just line drive. I just think base hit, line drive, do anything to get on base because I have my second, third and fourth batters coming up behind me to get me around the bases.”
Glenville head coach Kristen Tunno couldn’t promise a starting position to Stevens, but she made it clear to the recruit that playing in her first season wasn’t out of the question.
“The coach told me if I come in and work my butt off and keep practicing hard that I could start as a freshman if I beat somebody else out of their spot just like in high school. It just depends on how hard I work and how dedicated I am and I can’t wait to prove that to her.”
If hard work is the key, Fields said Stevens has a good opportunity to play early. And not only is Stevens a versatile fielder, she is a versatile offensive player as well.
“She has a great work ethic, not only at our practices but I know her and her dad go in the back and hit off the tee. He does soft toss all the time,” said Fields.
“If she hits the sweet spot, she can hit it (over the fence), she can bunt, she’s quick as a cat around the baes. She’s been in the leadoff spot. She’s a really good hitter.”
Stevens plans to take biology courses and major in pre-dental.
“I’ve wanted to be a dentist since I was little,” said Stevens who is the daughter of Tracie Carey and Drew Stevens of Ironton.