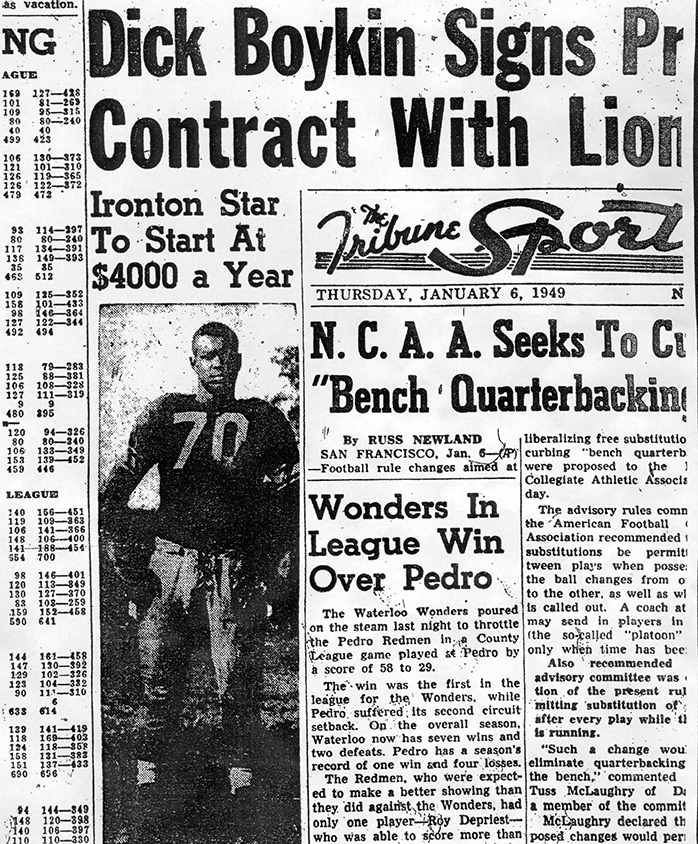 Cincinnati wasn’t the first professional team in Ohio to use the nickname “Bengals.”
In an attempt to resurrect the success and interest generated by the Ironton Tanks, the Ironton Bengals were formed in 1948 and were part of a semi-professional team that play other teams from Ohio, Kentucky and West Virginia.
The main weapon for the Bengals was a young, powerful running back named Dick “Meat” Boykin who had put together an impressive career at Ironton High School.
Boykin is considered by many — and rightfully so — the best running back to play at Ironton and possibly in the Tri-State area.
After playing end his first two season, Boykin was moved to the backfield. Ironton was just 2-6 in 1947 but 6-2 the following year.
Ironton’s scheduled included Stonewall Jackson (W.Va.), Huntington (W.Va.) High, Wayne (W.Va.), Chillicothe, Ashland (Ky.), Dayton Chaminade, Columbus North and Portsmouth.
Columbus East replaced Columbus North, Hamilton Catholic took the place of Stonewall Jackson and Lancaster fill the void of Huntington.
Boykin graduated in 1948 and agreed to play at Indiana University.
However, Indiana coach Bo McMillian — a native of Ashland, Ky. — was hired as the head coach of the Detroit Lions and took Boykin with him to the Lions and bypassed college football. He signed a contract for $4,000 a year or the equivalent of 41,972 in 2018.
“My mom told me that Bo McMillian said, ‘You’re not going to Indiana. You’re coming with me,” said Rick Boykin, son of Dick Boykin and an outstanding running back in his own right who played for Ohio University.
Unfortunately, Boykin suffered a knee injury halfway through the season that prematurely ended his professional playing career.
He later cut his hand working for Andy Washington Glass Company and was never able to grip the football tightly.
But Boykin wasn’t just a great football player. He also played basketball and baseball at Ironton and later played professional softball.
Ironton put together a professional team in 1948 and played in what was called the Tri-State Conference. Teams from Ohio, Kentucky and West Virginia were part of the league.
Since the high school team was the Tigers, the professional team christened itself the Bengals.
Led by Boykin and a star-studded roster, the Bengals posted a 9-0-1 record and won the Tri-State Conference championship.
The Bengals played in the league in 1949 but it was soon disbanded.

Venter has dropkick making a comeback in college football

The Associated Press Ruan Venter learned how to dropkick playing rugby in his native South Africa and sometimes would do... read more