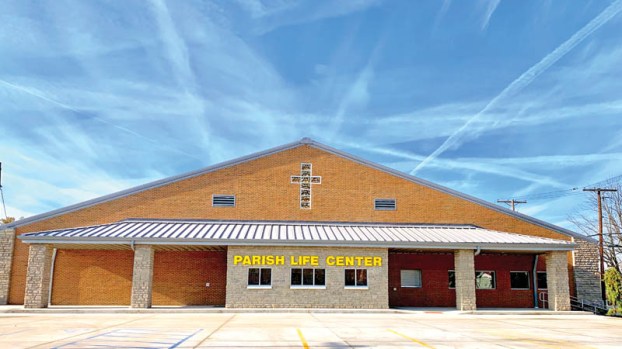 When it was opened, the St. Joseph Central Catholic High School gymnasium was a Cadillac.

However, as time wore on, it gradually became an Edsel.

All that has changed now.

The Catholic Community of Ironton — both in this area and now living in other parts of the country — have made a vision become a reality.

St. Joseph School began construction on its current building in 1924 and opened its doors to students in 1925.

At the time, the school featured one the largest and most modern gymnasiums in Lawrence County, as well as the area — surpassed only in size by Ironton High School.

As time elapsed, new area schools were built and had even larger gyms. In fact, St. Joseph’s gym is no longer even regulation size.

Under the idea, plan and direction of Father David Huffman, the Catholic Community of Ironton undertook the daunting task of building a Parish Life Center for the three area churches — St. Lawrence, St. Joseph and St. Mary’s — and included a new regulation-size gymnasium.

Huffman formed a focus committee comprised of two members from each church, a teacher and coach from the school, and the late Shawn Walker, who was not only a member of St. Lawrence Church, but was an award-winning architect.

After planning and seeking input, the project was a “go” and has now reached its final stage.
And as for the new facility, take a seat in my 2018 model Cadillac.

Huffman said the idea for a new life center was planted in his head by members of the parish. He would go to different sporting events when possible, including basketball games.

“We would go to small schools and they would have rather nice gyms. People asked me why we couldn’t have something like that,” said Huffman.

“I started dreaming and thinking and praying,” he said.

His prayers were answered with an 18,000-square foot building that has two levels.

The parking lot in front of the center has space for 35 automobiles.

But the community center is not just a gymnasium to be used for boys’ and girls’ basketball games, as well as volleyball. The center has a kitchen and additional rooms that will be used for church gatherings, meetings and other religious activities.

“Sports are a magnet and an anchor. Of course, the real anchor is Jesus and we have both. I had faith we could have both,” Huffman said.

Besides the gym floor, there is a weight room, a boys’ and a girls’ locker room, equipment storage room and a coaches’ office.

The new facility is 18,000-square feet and has two levels. The gymnasium will seat 553 fans.

The scorer’s table features an electronic lighted screen that displays the name and photo of a St. Joseph player as they are introduced or enter the game.

“Probably 70 to 75 percent of the donations have come from people who attended the Catholic schools. And they are people who live here and who have moved away,” Huffman said.

The Parish Life Center isn’t the only project that is sports related to be accomplished during Huffman’s 10-year tenure as the pastor of the three churches.

The former football practice field, donated decades ago by Fr. Robert Clouston, has since been used as the soccer field after shrinking enrollment caused the disbandment of football after the 1992 season.

Huffman — a huge Cleveland Indians’ baseball fan — had the idea to utilize the Clouston Field land to add the school’s own baseball field which was completed two years ago.

St. Joseph has used the Ironton City Schools and Ironton Little League facilities for their basketball, baseball and softball teams in the past.

The Flyers began playing in the old Ironton High School gym during the 1970s and then switched to the junior high school gym for boys’ games. The girls remained at the current St. Joseph High School.

When Ironton built a new high school, the Flyers began playing in the new auxiliary gym but often practiced at other sites.

Huffman had some words of thanks for past Ironton administrators, including former superintendent Dean Nance for their cooperation throughout the years.

“I want to thank the public schools for all the years they’ve been partners with us in sports and academics. I hope to continue to work with them in the future,” Huffman said.

But being independent from the public schools wasn’t the goal for Huffman. He felt that this project was something more directed at the spiritual side.

“The building is not a gym,” Huffman said. “It’s a church and school building. This is for our school and our churches. We need it to do both. It’s for school functions, meetings, bereavement, other church activities.”

“My goal was to re-energize our community. Everyone out in the community is saying, ‘Gee. Wow. It’s great what they’ve been able to do.’ Our kids need a place they can call home.”

That “new home” will open its doors for its first public event with the first basketball games to be held on Friday, Nov. 30, when the Lady Flyers play Rose Hill Christian at 6 p.m. followed by the boys’ game against Rose Hill.

Gentlemen — and ladies — start your engines. This new model Cadillac is ready to run.

Thanksgiving dinner for those in need