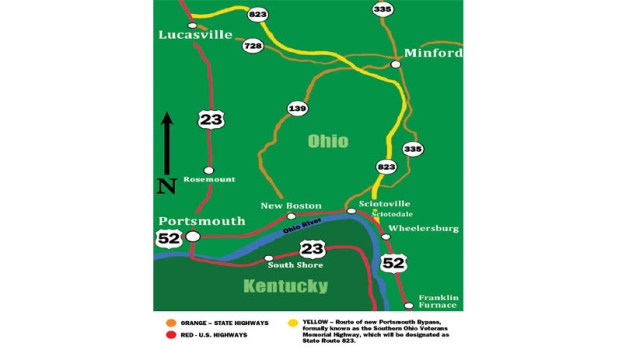 A map of the new Portsmouth Bypass, which is set to open in the coming weeks.

SCIOTOVILLE — Those traveling from our region to Columbus will soon see their drive time cut down significantly.

The Portsmouth Bypass, formally known as the Southern Ohio Veterans Memorial Highway, is nearly complete and is set to open sometime in mid-December, Kathleen Fuller, public information officer for the Ohio Department of Transportation District 9, said.

The $634 million dollar project began in 2015 and, designated as State Route 823, will connect traffic from U.S. 52 near Sciotodale to U.S. 23 north of Lucasville. Two interchanges, serving the Minford area, will be near the center of the route.

The route of the bypass, which will carry four lanes of traffic, is approximately 16 miles and will allow motorists to avoid the congestion that occurs toward Portsmouth. It is also hoped that it will reduce shipping traffic in the Portsmouth and New Boston areas, as tractor trailers currently have to drive into downtown Portsmouth to make the turn north to Columbus.

Fuller estimated that those driving from Ironton to Columbus would see their travel time reduced by a as much as a half hour from the existing route.

In addition to shortening the existing route, officials have also said the route could serve as an alternative to Interstate 77 and 70 for motorists from West Virginia, bringing more visitors through Lawrence, Scioto and other southern Ohio counties.

While official planning on the project began in 1999, it has, in many ways been 50 years in the making, with the earliest proposals for such a route originating in the 1960s.

As one of the largest earth moving projects in the state’s history, the bypass required the relocation of AEP electrical towers, more than 25 million cubic yards of excavation, culverts and construction of new bridges, including a 124-foot tall span over the Little Scioto River.

The bypass will complete the Appalachian Highway System in Ohio and was developed to ease isolation of southern, rural areas of the state and potentially increase economic development.

While no exact date has been set for the road’s opening, Fuller said things are on track and a dedication ceremony could be announced soon. The contract completion date for the project is Dec. 14.