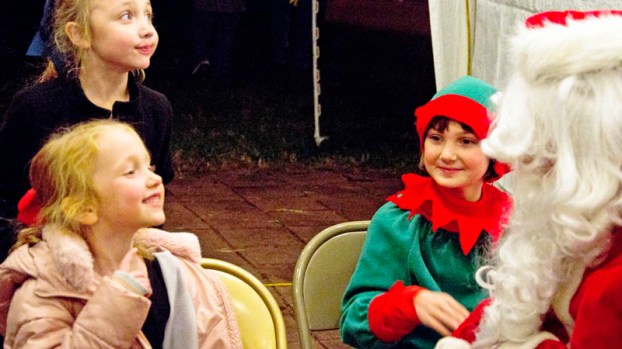 Catherine Mack meets with Santa and his helper, Olivia Sanders-Hart, at the annual Chesapeake tree lighting ceremony on Thursday.

CHESAPEAKE — The Christmas season is in full swing in the village of Chesapeake.

A sizeable crowd gathered around the shelter, where students from Chesapeake Elementary and the congregation of 26th Street Baptist Church sang carols such as “Joy to the World” and “Silent Night.”

“It is our church’s hope that, at this time of year, you find room in your heart for Jesus Christ,” Eric Wallace, the assistant pastor of the church, whose members were dressed for a Nativity scene, said.

Former Mayor Dick Gilpin, the president of CACC, said it was a larger than average crowd, which he attributed to the mild weather.

“We definitely have more young kids this year,” he said.

Following the carols, the lights were turned on in the park, as well as those on the village’s Christmas tree, before Santa made his much-heralded arrival on a truck from the Chesapeake-Union Volunteer Fire Department.

Children lined up to meet him and his helper, Olivia Sanders-Hart, and have their photos taken.

The tree lighting is one of the community events, such as Octoberfest, that CACC organizes each year in the village.

Investigated deaths up in 2018

The number of deaths investigated by the Lawrence County Coroner’s Office is up this year from last, according to county... read more