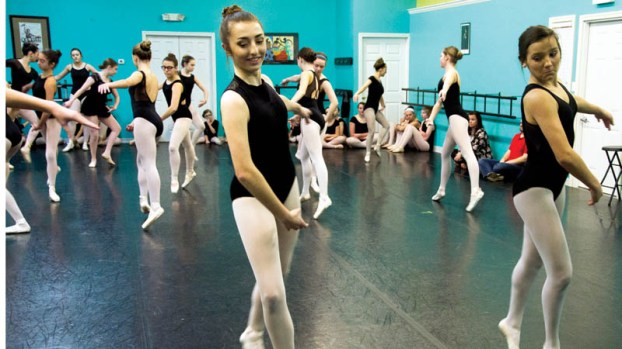 Dancers, including, Maggie Thompson, foreground, left, and Sabrina Sheridan, right, move through each other with precision during the Waltz of the Snowflakes.

‘Nutcracker’ set for Dec. 15 at Paramount

ASHLAND — Students at the Ashland Youth Ballet have been hard at work for months, rehearsing their parts, and the big performance is set for next month.

Planned as part of the group’s 30th anniversary series, the Ashland Youth Ballet will perform “The Nutcracker” at the Paramount Arts Center at 7 p.m. on Saturday, Dec. 15.

The cast, of more than 60 members, will be accompanied by a 32-piece orchestra, conducted by Dr. Scott Woodard, as well as a choir, who will add to the snow scenes.

“They were assembled locally and we’re very excited about that,” Maria Whaley, director of the ballet, said.

She said those taking part auditioned for their parts and preparations have been under way since August for the two-act ballet.

The show was originally choreographed by Marius Petipa and Lev Ivanov, of the Imperial Russian Ballet, and was set to a score by the nation’s famed composer Pyotr Ilyich Tchaikovsky.

Its premiere took place at the Mariinsky Theatre in St. Petersburg, Russia on Dec. 18, 1892.

While not initially considered a success, “The Nutcracker” saw a resurgence of interest in the United States in the 1960s and has now become a staple of the Christmas season, performed by numerous companies and has been adapted into several films.

Starring as lead character Clara, a girl who receives the nutcracker at a Christmas Eve party, is Maddie Heighton, of Ironton.

The Nutcracker, portrayed by Sam Smittle, of Russell, becomes a handsome prince and travels with Clara to the Land of Sweets, where they meet the Sugar Plum Fairy, portrayed by Anna Detherage, of Ashland, and a host of characters.

In addition to the main show, there will be a Nutcracker Pancake Breakfast at Applebee’s from 8-10 a.m. on Saturday Dec. 1 and a Sugar Plum Tea, which serves as a fundraiser for the ballet, at ARDT Studios at 1:30 p.m. on Sunday, Dec. 9. And at 9:30 a.m. on Friday, Dec. 14, there will be a separate performance at the Paramount for local schools.

Tickets for “The Nutcracker” may be purchased through the Paramount Arts Center Box Office at 606-324-0007 or www.paramountartscenter.com, Monday-Friday from 9-5 p.m.