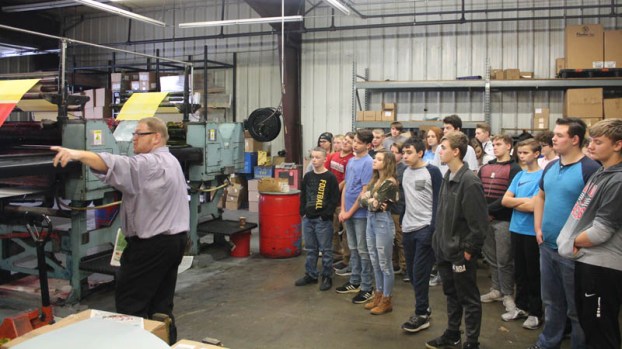 Tribune Publisher Scott Schmeltzer talks to Minford Middle School eighth graders about the press area during a visit to The Tribune on Monday.

On Monday morning, around 100 Minford Middle School eighth graders toured the offices of The Tribune. For most of the students, it was just a tour but for 21 students that make up of the staff of The Red and Gray newspaper, it was an experience to learn from professionals how they produce a paper everyday.

The tour began with publisher Scott Schmeltzer explaining how the basics of the newspaper work and taking questions, before showing them the press that produces The Tribune and several other publications.

Sabrina Shonkwiler, who teaches eighth grade language arts, said the middle school revived the newspaper this year and the students named it after Minford school colors.

“A couple of years ago, we came down here on a tour and the students loved it,” she said. “It has been several years since we had a newspaper and we decided to resurrect it because it went so well the last time we had it.”

Shonkwiler said she has a hardworking staff.

“And I knew they would be up to the task of producing a newspaper and they have,” she said.

The newspaper is both printed and put online. “I just thought this would be a great way to challenge them as writers. They learn so many skills, such as interviewing and chasing news stories. I think that is critical for their communication skills.”

The Red and Gray has two co-editors, Michal Kron and Lucy Grashel.

Kron said it would be really fun and neat to be an editor because her school hasn’t had a newspaper for a while.

“Being able to get events out to parents and students would be really cool and being able to print it and see all this come together is just a lot of fun,” she said.

She said her favorite part was reading reporters’ stories.

“I like seeing the thoughts they put into it,” Kron said, adding the hardest part is putting the newspaper together. “Getting it all onto templates and getting it all into the paper.”
Grashel said she was interested in being on The Red and Gray because “I like putting articles together, it’s really fun to do that. And I thought it would be a fun idea to do the newspaper with Michal because we’re really good friends and like doing stuff together.”

She agreed with Kron that getting all the stories to fit in their newspaper was her least favorite part.

“If it’s too short, we like to put pictures in,” she said. “If it’s too long, we ask the reporter if they can revise it and shorten it a little bit.”

Grashel said her favorite part was seeing how all the various departments work together to get a newspaper out to the public.

Kron said her favorite part of the tour was seeing the large four-color press.

“We have just a black and white printer in our teacher’s copy room,” she said. “So it was cool seeing everything that goes into a big newspaper.”

With lanterns and candles lighting the way, guides took visitors on a tour of Ironton’s places of worship on Saturday.... read more